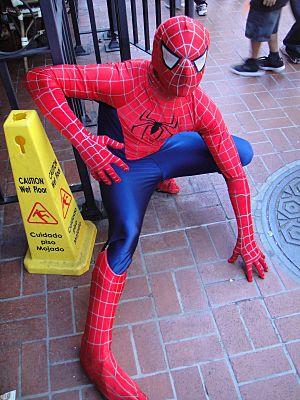 A cosplayer dressed up in the Raimi style of Spider-Man.

Spider-Man is the main hero of the 2002-2007 Sam Raimi Spider-Man trilogy and based on the Marvel Comics character of the same name. He was played by Tobey Maguire in all three movies and tie-in video games.

Peter Parker was raised by his Aunt May and Uncle Ben. He is very smart and a good student, but is picked on by his classmates. After a spider bites him during a field trip, Peter gains spider-like superhero abilities. He uses his powers selfishly at first, but after Uncle Ben is killed, Peter realizes that "with great power comes great responsibility" and starts using his powers to protect the people of New York City, becoming Spider-Man. Throughout the movie series, Spider-Man fights villains such as the Green Goblin, Doctor Octopus, Sandman, and Venom while also maintaining friendships with Harry Osborn and his long-time crush Mary Jane Watson, who later falls in love with him. He also learns lessons on responsibility, sacrifice, and forgiveness.

Tobey Maguire's portrayal has been well-liked, even by his successors Andrew Garfield and Tom Holland. His portrayal in the third movie, particularly where he has the black suit on has had mixed signals.

All content from Kiddle encyclopedia articles (including the article images and facts) can be freely used under Attribution-ShareAlike license, unless stated otherwise. Cite this article:
Peter Parker (Sam Raimi movie series) Facts for Kids. Kiddle Encyclopedia.