Petit Jean State Park is a 3,471-acre (1,405 ha) state park in central Arkansas managed by the Arkansas Department of Parks and Tourism.

Petit Jean State Park is located atop Petit Jean Mountain on the Arkansas River in the area between the Ozark and Ouachita mountain ranges, in Morrilton, Conway County, Arkansas.

According to legend Petit Jean was actually a young 18th century French woman. When she discovered that her fiance planned to explore the Louisiana Territory, she cut her hair, disguised herself as a boy and managed to find a position as a cabin boy. She survived the voyage and the expedition began their exploration. Once they had reached the area of the mountain, the young woman became ill, on her deathbed she revealed herself to her fiance, and was buried on the mountain, not under her own name, but under the name she had been known by on the ship "Little John". 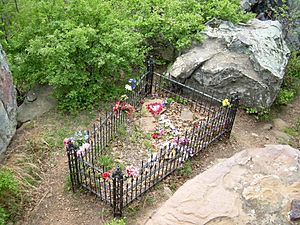 The grave of "Petit Jean" atop Petit Jean mountain.

Buildings of log and stone construction built by the Civilian Conservation Corps during the 1930s are scattered throughout the park giving it a rustic feel. A 24-room historic lodge called Mather Lodge sits on the edge of a bluff of a deep forested canyon. In addition to the lodge there are 32 cabins and 127 campsites available for park visitors.

The canyon and bluffs were created by Cedar Creek, which cascades into the canyon in an impressive 95-foot (29 m) waterfall. Above the falls, Cedar Creek has been dammed to create the 100-acre (40 ha) Lake Bailey which is used for pedal-boating and fishing.

Petit Jean has a visitor center and gift shop in the center of the park and a boathouse at Lake Bailey that provides boat rentals, fishing supplies, and a snack bar. Tennis and basketball courts, a swimming pool, and picnic areas are available for the use of park guests.

The Museum of Automobiles is less than a mile from the main camping areas.

The park also has several geological and archaeological features such as Bear Cave, Rock House Cave, the Grotto, Turtle Rocks, Carpet Rocks, and Natural Bridge. The scenic overlook at Petit Jean's grave provides a view of the Arkansas River Valley.

In January of 2017 Petit Jean State Park was named the best state park in Arkansas.

Panoramic view from Petit Jean Mountain overlook. Petit Jean's grave is just below, out of sight of the photo. The Arkansas River can be seen on the left.

Petit Jean State Park provides a variety of events throughout the year, ranging from mountain man rendezvous, wildflower weekend, and camping weekends to the swap meet and auto show. Mather Lodge also has special programs for guests during the Christmas season, New Year's Eve, and other holidays. A free e-mail newsletter subscription containing notices of events is available via the park's website.

All content from Kiddle encyclopedia articles (including the article images and facts) can be freely used under Attribution-ShareAlike license, unless stated otherwise. Cite this article:
Petit Jean State Park Facts for Kids. Kiddle Encyclopedia.