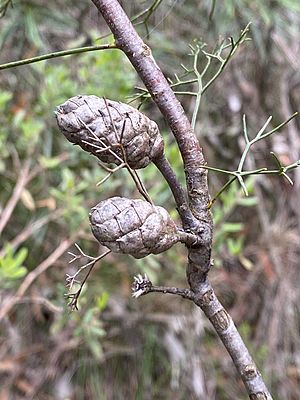 Petrophile pedunculata, commonly known as conesticks, is a species of flowering plant in the family Proteaceae and is endemic to New South Wales. It has divided leaves with needle-shaped pinnae and oval heads of sparsely hairy yellow or cream-coloured flowers, the heads on a peduncle 10–15 mm (0.39–0.59 in) long.

This petrophile can be distinguished from the related P. pulchella which has flowers heads that are sessile or on peduncles up to 10 mm (0.39 in) long.

Petrophile pedunculata was first formally described in 1810 by Robert Brown in the Transactions of the Linnean Society of London from material collected near Port Jackson.

Petrophile pedunculata is found growing on shallow sandstone soils, often in open forest or heathlands. It is common along the coast of New South Wales between Port Jackson and Milton and on the ranges between the Blue Mountains and Marulan.

All content from Kiddle encyclopedia articles (including the article images and facts) can be freely used under Attribution-ShareAlike license, unless stated otherwise. Cite this article:
Petrophile pedunculata Facts for Kids. Kiddle Encyclopedia.