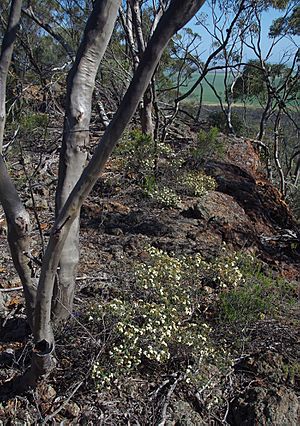 Phebalium megaphyllum is a species of erect, rounded shrub that is endemic to Western Australia. It has glandular-warty branchlets, oblong to wedge-shaped leaves with a groove on the upper surface, and white flowers arranged in umbels of three to six on the ends of branchlets.

This phebalium was first formally described in 1907 by Alfred James Ewart who gave it the name Eriostemon tuberculosus var. megaphyllus and published the description in Proceedings of the Royal Society of Victoria. In 1998, Paul G. Wilson changed the name to Phebalium megaphyllum, publishing the change in the journal Nuytsia.

This phebalium is classified as "not threatened" by the Government of Western Australia Department of Parks and Wildlife.

All content from Kiddle encyclopedia articles (including the article images and facts) can be freely used under Attribution-ShareAlike license, unless stated otherwise. Cite this article:
Phebalium megaphyllum Facts for Kids. Kiddle Encyclopedia.