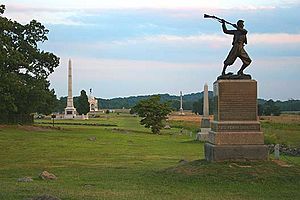 The Philadelphia Brigade was a brigade in the Union Army during the American Civil War. It got its name because its soldiers came from the city of Philadelphia, Pennsylvania. It was part of the Army of the Potomac.

All content from Kiddle encyclopedia articles (including the article images and facts) can be freely used under Attribution-ShareAlike license, unless stated otherwise. Cite this article:
Philadelphia Brigade Facts for Kids. Kiddle Encyclopedia.