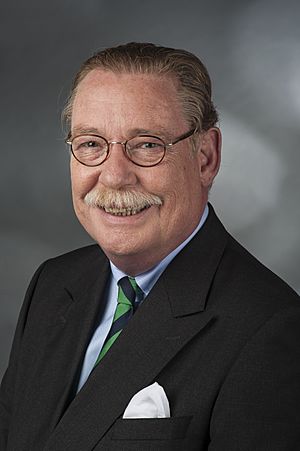 Philipp Graf von und zu Lerchenfeld (25 May 1952 – 1 December 2017) was a German politician. He was member of the Christian Social Union in Bavaria (CSU). He was a member of the Landtag of Bavaria from 2003 to 2013. He then served as a member of the Bundestag from 2013 to 2017. Besides being a politician, he was also a farmer, accountant and tax consultant.

Lerchenfeld was born in Köfering, Regensburg District, Bavaria. He was a Roman Catholic. He was married to Marie Therese.

All content from Kiddle encyclopedia articles (including the article images and facts) can be freely used under Attribution-ShareAlike license, unless stated otherwise. Cite this article:
Philipp Graf Lerchenfeld Facts for Kids. Kiddle Encyclopedia.