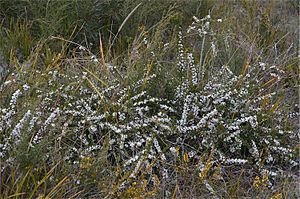 Philotheca virgata, commonly known as Tasmanian wax-flower, is a species of flowering plant in the family Rutaceae and is endemic to south-eastern Australia. It is a slender, erect shrub with wedge-shaped to oblong leaves and white or pale pink flowers at the ends of branchlets. It is the only philotheca with four sepals and petals.

Tasmanian wax-flower was first formally described in 1840 by Joseph Dalton Hooker from an unpublished description by Allan Cunningham who gave it the name Erisotemon virgatus. Hooker published the description in The Journal of Botany. In 1998, Paul Wilson changed the name to Philotheca virgata in the journal Nuytsia.

Philotheca virgata grows in heathland and forest in coastal areas of southern and western Tasmania, south of Eden in New South Wales and in the extreme north east of Victoria.

All content from Kiddle encyclopedia articles (including the article images and facts) can be freely used under Attribution-ShareAlike license, unless stated otherwise. Cite this article:
Philotheca virgata Facts for Kids. Kiddle Encyclopedia.