Kids Encyclopedia Facts
This article is about Pinacate Peaks. For other uses, see Pinacate, California (disambiguation). 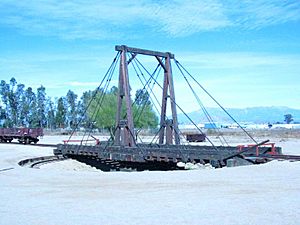 Turntable, currently in the museum.

Pinacate (Mexican Spanish word for the Pinacate beetle), was a small settlement east of the Pinacate Mining District in Riverside County, California. It was established when the California Southern Railroad line was built between Colton and San Diego in 1882. Due to a land title dispute the town was moved to the north to become Perris, California, in 1885.

The Pinacate station remained and has become the location of the Orange Empire Railway Museum.

The Pinacate Middle School is in the area.

All content from Kiddle encyclopedia articles (including the article images and facts) can be freely used under Attribution-ShareAlike license, unless stated otherwise. Cite this article:
Pinacate, California Facts for Kids. Kiddle Encyclopedia.