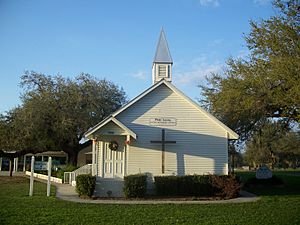 Pine Level was founded in the 1850s and had bars, saloons, courthouse, jail, stores, churches and homes. Gunfights were considered a common sight on the streets here.

In 1866, the site of what became Pine Level was chosen as the new county seat of Manatee County to replace the Manatee River village of Manatee (now the eastern section of Bradenton). Ostensibly Pine Level was chosen for its more central geographic location, but it may have been chosen to punish Manatee for its Confederate sympathies in the Civil War.

The East & West Coast Railway began construction of a route from Bradenton east to Arcadia in July 1913. The nearly 50 mile long line was completed and opened for operation on May 3, 1915. Pine Level was located on this line, 41 miles from it starting point in Bradenton. Pine Level had a depot, a 1,348' railroad siding and a 524' spur track. The railroad served a large saw mill at Pine Level. In July 1933, the Interstate Commerce Commission authorized the East & West Coast Railway to abandon the tracks from Bradenton to Arcadia. Most of the abandonment actually then took place in September 1934.

All content from Kiddle encyclopedia articles (including the article images and facts) can be freely used under Attribution-ShareAlike license, unless stated otherwise. Cite this article:
Pine Level, DeSoto County, Florida Facts for Kids. Kiddle Encyclopedia.