Kids Encyclopedia Facts
This page is about the unincorporated settlement. For the landform, see Pine Valley (Utah).

Pine Valley, Utah is an unincorporated census-designated place in Washington County, Utah, United States that lies approximately 45 minutes north of the county seat, St. George. It is located at the head of the Santa Clara River in the Pine Valley Mountains, and was settled in 1859. The population was 186 at the 2010 census.

Significant landmarks include the Pine Valley Ward Chapel of The Church of Jesus Christ of Latter-day Saints designed by shipbuilder Ebenezer Bryce in 1868 using the scheme of an upside-down boat. Pine Valley Chapel is the oldest Mormon chapel in continuous use. 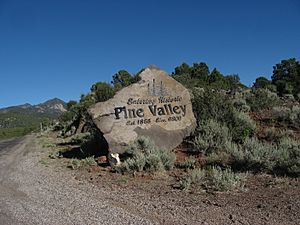 All content from Kiddle encyclopedia articles (including the article images and facts) can be freely used under Attribution-ShareAlike license, unless stated otherwise. Cite this article:
Pine Valley, Utah Facts for Kids. Kiddle Encyclopedia.