Kids Encyclopedia Facts
This page is about the novel by Ruth Park. For the film, see Playing Beatie Bow (film).

Playing Beatie Bow is an Australian children's book written by Ruth Park and first published on 31 January 1980. It features a time slip in Sydney, Australia.

Lynette Kirk was a happy young girl, cheery about her parents and life, until the day her father leaves her and her mother Kathy for another woman. Lynette wants to distance herself from the life they shared with her father, so she changes her name to Abigail.

Lynette goes down to the park with her young next door neighbours Natalie and Vincent, finding them playing a game called 'Beatie Bow'. After becoming very interested in a little girl that stands there watching them play ("Little Furry Girl") she decides to follow her. When Abigail's mother admits that she has been seeing her father again and would like them all to move to Norway, where he works as an architect, Abigail is furious and goes for a walk to cool off, again encountering the mysterious girl. She follows her back into the 1800s and is tripped by the Little Furry Girl's father, resulting in a sprained ankle and a bruised head.

Further into the novel the character Granny (Alice Tallisker) tells Abigail that she is 'the stranger' and has 'the gift'. 'The gift' comes from a crocheted detail on her dress which enables her to travel and heal. The book later suggests that Granny will complete the crochet.

Abigail falls in love with Judah, who is betrothed to Dovey, and realises firsthand what it is like to love somebody but not be able to have them. This helps Abigail realise that she should not be selfish towards her parents and should let them have a second chance at life and marriage.

Abigail finally manages to return to her own time, and discovers that her neighbors Natalie and Vincent are the descendants of the Bow family. She also finds out that Beatie grew up to be a lady and well educated, and Judah dies at sea after marrying Dovey. After Abigail returns from Norway with her parents she meets Natalie and Vincent's uncle, who looks precisely the same as Judah. The two fall in love and Abigail tells him the story of how she went back in time.

The story concerns a 14-year-old girl named Abigail Kirk (formerly Lynette). While distraught over her parents' separation, she travels back in time as the result of a scary playground game. She finds herself involved with a shopkeeper's family in colonial Sydney-Town in the year 1873, where she meets Beatie Bow, a girl whose name appears in the game she was playing. Much of the book is set in real-life locations around Sydney's historical Rocks district. 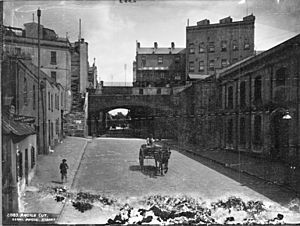 Westward view along Argyle Street from Harrington Street towards Cambridge Street and the Cut, around 1900.

In 1986, the book was turned into a feature film also called Playing Beatie Bow. Made by the South Australian Film Corporation, it starred Imogen Annesley as Abigail, Peter Phelps as Judah Bow and Mouche Phillips as the title character Beatie Bow.

In 2021, the Sydney Theatre Company will be performing a play based on the book, by leading Australian playwright Kate Mulvany and artistic director Kip Williams, the duo responsible for the multi-award-winning 2018 stage adaptation of Park's book The Harp in the South.

All content from Kiddle encyclopedia articles (including the article images and facts) can be freely used under Attribution-ShareAlike license, unless stated otherwise. Cite this article:
Playing Beatie Bow Facts for Kids. Kiddle Encyclopedia.