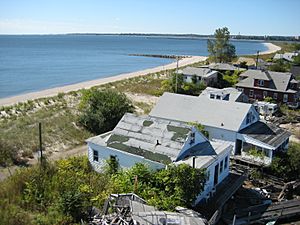 An aerial view (from a kite) of Pleasure Beach. 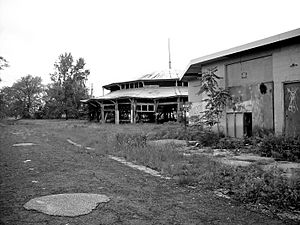 A view of the carousel that was part of the original amusement park at Pleasure Beach.

Pleasure Beach is the Bridgeport portion of a Connecticut barrier beach that extends 2.5 miles (4 km) westerly from Point No Point (the portion in the adjoining town of Stratford is known as Long Beach). Prior to June, 2014, when Pleasure Beach re-opened, the area was Connecticut's largest and most recent ghost town after it was abandoned in the late 1990s due to a fire on the bridge connecting it to the mainland. It is surrounded on three sides by water (Lewis Gut to the north, Bridgeport Harbor to the west, and Long Island Sound to the south).

From 1892 until 1958, it was home to a popular amusement park of the same name. From 1904 to 1919, it was called "Steeplechase Island." The amusement park was accessible primarily by ferry service and a wooden swing bridge built in 1927 to carry automobiles and pedestrians. Remaining structures from the amusement park are the carousel, dodge-'em car enclosure, and beer garden (the latter was substantially altered for use as a summer theater in the 1960s).

After a portion of the bridge burned in 1996, Pleasure Beach was cut off and became accessible only by a lengthy trek along the shoreline, or by small private boats from the mainland. This severely limited access and allowed nature to be undisturbed. As late as December 2008, Bridgeport considered a ferry service to relink the beach with the city, but this was rejected due to parking considerations and the need for a Coast Guard registered captain.

As of June 2014, Pleasure Beach has re-opened. From the city of Bridgeport's website: "The peninsula will be accessible seven days a week via free water taxi, which will pick beach goers up at the fishing pier located on Seaview Avenue near its intersection with Central Avenue.

"Two water taxis -- the 23 passenger Lewis H. Latimer and the 18 passenger Gustave Whitehead -- will run frequently from the fishing pier on Seaview Avenue to the T-Pier on Pleasure Beach.

"Upon arrival on the T-Pier on Pleasure Beach, it’s about a half-mile walk along a boardwalk to the beach area. While en route, visitors will pass an info depot where beach goers will be able to ask questions and gain more information about the park. 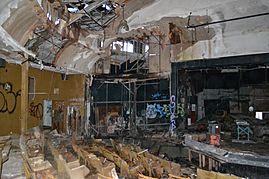 "After passing the info depot, visitors will come upon a pavilion and relaxation area that includes several bathrooms, showers, picnic tables and a limited concession stand. And, after walking through the pavilion area, beach goers will walk down a boardwalk and onto the beautiful beach."

The Town of Stratford owned 45 cottages on the Long Beach portion of the peninsula. For a decade, the town considered ending the leases of the seasonal homes, in part because of difficulties in protecting them. The town ended renewal of leases, and in May 2007, the remaining occupants agreed to give up their claims and moved their possessions away by barge. The cottages have since been demolished. 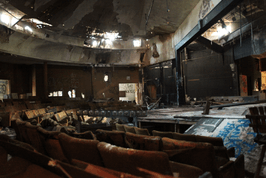 The abandoned community theater is one of the few buildings that remain on the peninsula (shown here as it stands August 2012.)

Pleasure Beach is a protected refuge for endangered birds (piping plover, osprey) and plants (prickly pear cactus, southern sea lavender). Sections of the beach are roped off seasonally to protect the plover nesting areas. There is also an abundance of cotton-tailed rabbits, deer, foxes, raccoons, and other mammals. The sand spit is estimated to contain more than 25% of the remaining undeveloped beachfront in the state.

The transmitter towers for radio station WICC (AM) are located on Pleasure Beach. The station uses an amphibious landing craft when it needs to deliver cargo.

All content from Kiddle encyclopedia articles (including the article images and facts) can be freely used under Attribution-ShareAlike license, unless stated otherwise. Cite this article:
Pleasure Beach Facts for Kids. Kiddle Encyclopedia.