Point Turton is a coastal town 114 kilometres (71 mi) west of Adelaide, South Australia. It is located in the Yorke Peninsula Council.

The 2006 Census by the Australian Bureau of Statistics counted 205 persons in Point Turton on census night. Of these, 56.1% were male and 43.9% were female.

The majority of residents (89.3%) are of Australian birth, with an additional 5.9% declaring England as their country of birth.

The Point Turton General Store is the main shopping facility in the town.

The Tavern on Turton is a hotel that opened in 2007.

The town also has a caravan park and some holiday cottages houses along the beachfront. 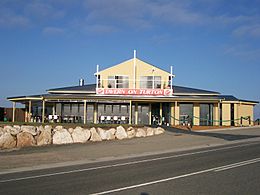 Tavern on Turton opened in mid-2007

Point Turton is notable for its fishing, being regularly featured on fishing programs.

All content from Kiddle encyclopedia articles (including the article images and facts) can be freely used under Attribution-ShareAlike license, unless stated otherwise. Cite this article:
Point Turton, South Australia Facts for Kids. Kiddle Encyclopedia.