Polytrichum juniperinum, commonly known as juniper haircap or juniper polytrichum moss, is an evergreen and perennial species of moss that is widely distributed, growing on every continent including Antarctica.

The stems are reddish with grey-green leaves that have a distinctive red-brown tip. This characteristic allows them to be separated from the bristly haircap (Polytrichum piliferum), a plant that the juniper haircap moss have a close resemblance to; the difference is that the bristly haircap have a green tip. The leaves of juniper haircap moss are lanceolate and upright spreading when dry, and when moist, wide-spreading. Although their growth form can be varied, they generally grow in thin, interwoven mats, and hardly as closely associated individuals. Juniper haircap moss have a well-developed system of tiny tubes for carrying water from the rhizoids to leaves that is uncharacteristic of mosses, resembling the system that has evolved in vascular plants such as ferns, gymnosperms and angiosperms. As a result of this developed system, stems have greater potential for height than in typical mosses.

Juniper haircap moss grows across a wide gradient of habitats but it is most commonly found on dry, acidic, exposed habitats. It is frequent in areas that previously experienced disturbances such as fire and logging. Other areas they occupy are mineral soil, humus and rocks, stumps, banks, trailsides and dry open woods. Although Juniper haircap moss is not usually found in moist or wet environments, it has been found growing on moist woods and other moist sites such as streambanks. 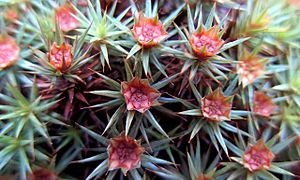 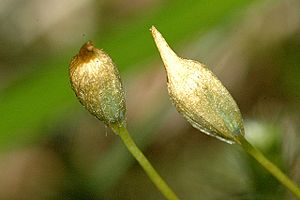 The sporophyte of Polytrichum juniperinum.

It is a dioecious plant, meaning that the male and female gametophytes are on separate plants. Juniper haircap moss have very obvious male and female parts. Male plants are said to be unusual because they continue growing without losing the old male organs. The male plants are very noticeable due to their bright reddish orange modified leaves that form small terminal 'flowers' at the shoot ends. The plant has a gametophyte dominant life cycle similar to other mosses. Water is required for reproduction to take place, to enable the sperm to swim down the neck of the archegonia to reach the egg. Once fertilization takes place, the sporophyte of the juniper haircap moss lives on the female gametophyte, growing out of the archegonia. The sporophyte consists of a foot, stalk, a spore capsule, an operculum, and a calyptra. There are 64 short blunt teeth at the top surrounding the capsule mouth and the hood of the capsule, the calyptra, has long hairs that extends down the entire length of the capsule, hence the name 'haircap moss'.

The herb is believed to be a powerful diuretic by herbalists. Because it increases urinary secretions,[unreliable medical source?] it is useful in the treatment of urinary obstructions and dropsy, an old term for today's edema, which is defined by medicinenet as the swelling of tissue due to accumulation of excess water. The plant is also considered to be excellent for long term use because it does not cause nausea.[unreliable medical source?]

All content from Kiddle encyclopedia articles (including the article images and facts) can be freely used under Attribution-ShareAlike license, unless stated otherwise. Cite this article:
Polytrichum juniperinum Facts for Kids. Kiddle Encyclopedia.