The Pont-y-Cafnau (English: Bridge of Troughs, sometimes written Pont y Cafnau or Pontycafnau) is a 14.2-metre (47 ft) long iron truss bridge over the River Taff in Merthyr Tydfil, Wales. The bridge was designed by Watkin George and built in 1793 for his employer, the Cyfarthfa Ironworks, to support both a tramway and an aqueduct to carry limestone and water into the works. A Grade II* listed building and Scheduled Ancient Monument, the Pont-y-Cafnau is the world's earliest surviving iron railway bridge.

The Cyfarthfa Ironworks were founded in 1765 and grew to the world's largest ironworks by the early 19th century. In 1771, the works obtained the right to quarry limestone from the Gurnos Quarry for use in the works' blast furnaces, and a 4 ft (1,219 mm) gauge tramway was built between 1792 and 1793 to carry the limestone from the quarry into the plant. Pont-y-Cafnau is situated shortly downstream of the confluence of the Taff Fawr and the Taff Fechan to form the Taff. A weir had previously been built upstream of the plant on each river, and leats were built to convey water into the works. The leat from the Taff Fawr was conveyed in a cast iron elevated aqueduct which ran along the north bank and crossed the Taff Fechan before crossing the Taff at Pont-y-Cafnau and entering the works to power a 50-foot cast iron water wheel known as Aeolus. The leat from Taff Fechan was at ground level and again crossed the Taff at Pont-y-Cafnau. This supplied water to the Cyfarthfa brick works. The three levels of Pont-y-Cafnau thus carried the elevated Taff Fawr leat, the tramway and Taff Fechan leat across the Taff River. The bridge was built between January and June 1793, replacing a previous wooden structure, and is the world's oldest known iron railway bridge. The elevated trough carrying the Taff Fawr leat was removed by 1850, having been replaced by a leat along the south bank of that river. 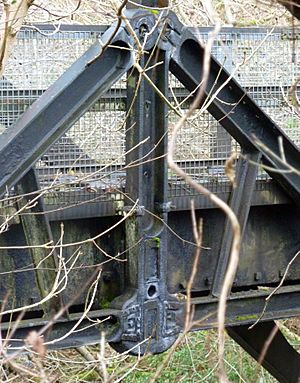 The present bridge was designed by Watkin George. George had been trained as a carpenter, but in 1792 became the chief engineer of the ironworks and a partner in the business. The bridge is composed of two cast iron A-frame trusses supporting a rectangular 2-foot by 6-foot-2-inch cast iron trough. This lower trough carried the Taff Fechan leat and acts as a girder supporting the plates acting as the railway sleepers, into which the rail chairs are integrally cast. Wooden uprights were attached to the iron risers that passed through the apex of each of the A-frames and these supported the upper trough carrying the Taff Fawr leat. Reflecting its designer's roots in carpentry, the members composing the trusses are joined by dovetail and mortise and tenon joints commonly used in wooden structures.

All content from Kiddle encyclopedia articles (including the article images and facts) can be freely used under Attribution-ShareAlike license, unless stated otherwise. Cite this article:
Pont-y-Cafnau Facts for Kids. Kiddle Encyclopedia.