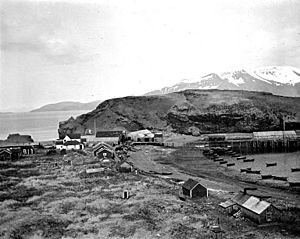 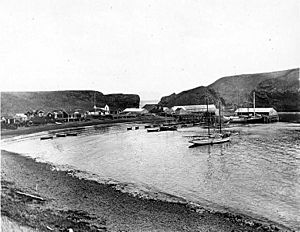 Pirate Cove on the island was developed as a major codfish fishing station.

A herd of introduced bison is on the uninhabited side of the island and currently numbers about 120. 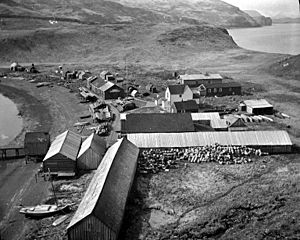 Popof Island first appeared as a separate political entity on the 1890 U.S. Census with a population of 146. Of these, 135 were White, 7 were Creole (Mixed Russian & Native), 3 were Asian and 1 was Native. This included 3 settlements on the island: Pirate Cove (a codfishing Station), which had previously appeared on the 1880 census separately with 7 residents (all White), located on the northeast side of the island; Red Cove (a fishing station) on the south side of the island; and Sand Point Station on the northwestern side of the island. Census enumerators also counted all the ships that were docked at Pirate Cove (including schooners Trapper and Unga) and those at Sand Point (including schooners Alexandria, City of San Diego, James Hamilton, Kate and Annie, San Diego, C.N. Smart & C.H. White).

Beginning in 1900, Popof Island villages reported separately. Red Cove was abandoned. Pirate Cove appeared once more on the 1920 census (population 98) before it was abandoned. Sand Point became the dominant village on the island, growing from 16 residents in 1900 to 976 by 2010. It incorporated as a city in 1966 and became important enough to be made the equivalent of county seat (borough seat) for the Aleutians East in 1987. As of 2000, all residents of Popof Island reside within the city limits of Sand Point.

All content from Kiddle encyclopedia articles (including the article images and facts) can be freely used under Attribution-ShareAlike license, unless stated otherwise. Cite this article:
Popof Island Facts for Kids. Kiddle Encyclopedia.