Popular Mechanics for Kids (sometimes abbreviated to PMK) is a Canadian educational television program based on Popular Mechanics magazine. The program aired on Global TV from 1997 to 2001. It was notable for starting the careers of Elisha Cuthbert, Jay Baruchel, Tyler Kyte, and Vanessa Lengies. The show's intent was to teach viewers how things work. It was awarded the Parents Choice Award in 2003, and was nominated for the Gemini Awards.

Along with Elisha Cuthbert and Jay Baruchel, the cast included Charles Powell, nicknamed "Charlie" for the program, Tyler Kyte (who joined the show in the second season), and eventually Vanessa Lengies.

The program starts off with an overview of the episode. The hosts (Elisha, Tyler, Jay, and later Vanessa) then start their adventures on the show (amusement park, snowboarding, surfing, visiting a science museum, etc.) Throughout the adventures, short, educational segments are shown.

In the segment "Charlie's Experiment / Tip", host Charlie, and sometimes the other hosts, demonstrate an experiment. He sometimes answers frequently asked questions about related science topics. At the start of season 3, one of the hosts (usually Vanessa) would go on a third adventure. The show then comes to a close, with the co-hosts saying "See you next week!".

There have been four VHS videos called "How Do They Build?", hosted by a boy named Mike and a miniaturized man named Pop. 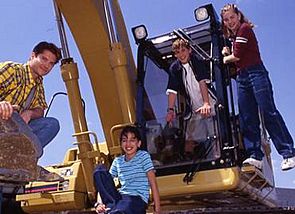 The series aired in syndication in the United States, before moving to moving to Discovery Kids on Saturday mornings by the program's final season in 2001. Re-runs of the show continued to air on many channels until 2008. It piloted on BBC Kids and Discovery Kids in Canada until December 31, 2009. After the closure of Discovery Kids Canada, BBC Kids stopped airing reruns in all countries except Canada. The reruns on BBC Kids in Canada ended on May 14, 2011. As of 2013[update] re-runs of the show continue to air on Knowledge Network.

All content from Kiddle encyclopedia articles (including the article images and facts) can be freely used under Attribution-ShareAlike license, unless stated otherwise. Cite this article:
Popular Mechanics for Kids Facts for Kids. Kiddle Encyclopedia.