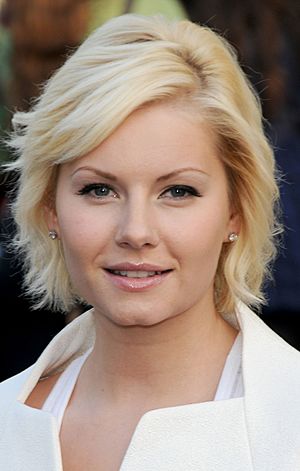 Elisha Cuthbert (born November 30, 1982) is a Canadian actress. She was born in Calgary, Alberta. She grew up in Greenfield Park, Quebec.

Cuthbert played Kim Bauer in 24. She starred as the title character in The Girl Next Door. She played one of the main characters in the sitcom Happy Endings. She was on the 2013 TV series 24/7. Cuthbert played Lizzy on the 2015 tv sitcom One Big Happy.

All content from Kiddle encyclopedia articles (including the article images and facts) can be freely used under Attribution-ShareAlike license, unless stated otherwise. Cite this article:
Elisha Cuthbert Facts for Kids. Kiddle Encyclopedia.