Port-Cartier is a town in the Côte-Nord region of Quebec, Canada. It is located on the north shore of the Saint Lawrence River at the mouth of the Aux-Rochers River, exactly 63 kilometres (39 mi) southwest of Sept-Îles, Quebec.

In 1915, Colonel Robert R. McCormick, owner of the Chicago Tribune, visited the Rochers River area to evaluate its forest potential. Soon after, a settlement was established on the west side of the mouth of this river, originally called Shelter Bay. The post office opened in 1916, followed by a sawmill in 1918 and a debarking factory of the Ontario Paper Company in 1920. Yet the exhaustion of timber led to the closure of the factory in 1955.

In 1958, the Québec Cartier Mining Company constructed an iron ore processing plant and an artificial sea port near Shelter Bay, for shipping the iron ore mined from deposits at Lake Jeannine near Fermont. Port-Cartier, named after the mining company, was incorporated as a town in 1959 and the next year, Shelter Bay was added to it. The original town of Shelter Bay is now the suburb known as Port-Cartier West. Today, the port handles approximately 18,000,000 tonnes (19,800,000 short tons; 17,700,000 long tons) of cargo per year and ranks third in Quebec in terms of handled tonnage. 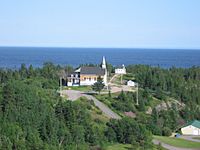 In 1875, a mission called Saint-Patrice-de-la-Rivière-Pentecôte was established some 100 km south-west of Sept-Îles at the mouth of the Pentecôte River. This name is attributed to Jacques Cartier who arrived at the place on the day of Pentecost in 1535. In 1884, the "Penticost River" Post Office opened, frenchized to Rivière-Pentecôte in 1933. At the end of the 19th century, it was among the most important industrial centres along the North Shore. In 1972, the Municipality of Rivière-Pentecôte was formed out of unorganized territory.

On February 19, 2003, the Municipality of Rivière-Pentecôte was amalgamated into the Town of Port-Cartier. 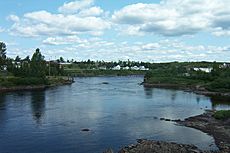 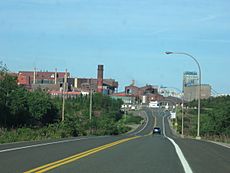 All content from Kiddle encyclopedia articles (including the article images and facts) can be freely used under Attribution-ShareAlike license, unless stated otherwise. Cite this article:
Port-Cartier Facts for Kids. Kiddle Encyclopedia.