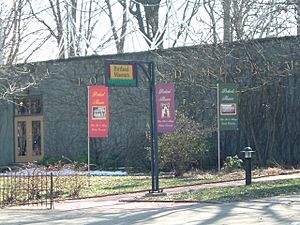 The Portland Museum is located at 2308 Portland Avenue

The Portland Museum is a neighborhood history and art museum in Louisville, Kentucky. It details the history of the Portland neighborhood through several permanent and temporary exhibits.

The museum was established in 1978 in a local school. In 1982 all exhibits were moved to the 1852 Beech Grove Estate mansion on Portland Avenue. A larger wing has since been added to the north side of the building. Several gardens are located directly behind the museum, emulating the 19th-century garden that the building's original owners had.

Notable permanent exhibits include several original paintings of the Squire Earick family done by family friend John James Audubon, a collection of historic photographs of Portland, and an animated guide by Captain Mary Millicent Miller, a robotic mannequin, telling how she became the first woman licensed as a steamboat master in America. Recently, Portland native and former football star Paul Hornung donated a large amount of memorabilia to the museum. The tours of the exhibits are guided. The museum also exhibits detailed plans for the Portland Wharf Park.

The Portland Museum also owns the Squire Earick House, Louisville's oldest known structure. The building is currently being renovated, with plans to open it to the public. The museum also organizes an annual cleanup of the former Portland Wharf site.

All content from Kiddle encyclopedia articles (including the article images and facts) can be freely used under Attribution-ShareAlike license, unless stated otherwise. Cite this article:
Portland Museum (Louisville) Facts for Kids. Kiddle Encyclopedia.