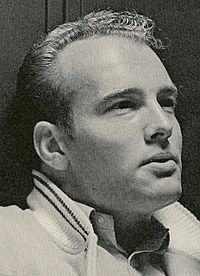 Paul Vernon Hornung (December 23, 1935 – November 13, 2020), nicknamed The Golden Boy, was a professional American football player and a Hall of Fame running back for the Green Bay Packers of the National Football League (NFL) from 1957 to 1966. He was an offseason player with the New Orleans Saints in 1967.

Hornung died on November 13, 2020 in Louisville from dementia-related problems, aged 84.

All content from Kiddle encyclopedia articles (including the article images and facts) can be freely used under Attribution-ShareAlike license, unless stated otherwise. Cite this article:
Paul Hornung Facts for Kids. Kiddle Encyclopedia.