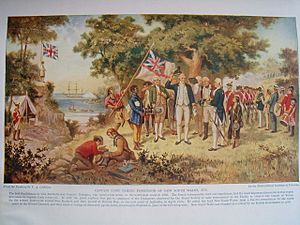 Possession Island is a small island in the Torres Strait Islands group off the coast of far northern Queensland, Australia. It is known as Bedanug or Bedhan Lag by one of the Indigenous Australian groups of Torres Strait Islander people, the Kaurareg, though the Ankamuti were also indigenous to the island.

Possession Island is included in Possession Island National Park, an area of 5.10 square kilometres (1.97 sq mi) which includes Eborac Island. The park was established as a Protected Area in 1977 and managed by the Queensland Parks and Wildlife Service.

During his first voyage of discovery, British explorer, then Lieutenant James Cook sailed northwards along the east coast of Australia, landing at Botany Bay. Reaching the tip of Queensland, he named and landed on Possession Island, just before sunset on 22 August 1770, and declared the coast British territory in the name of King George III. Cook wrote in his journal: "I now once more hoisted English Coulers and in the Name of His Majesty King George the Third took possession of the whole Eastern Coast...by the name New South Wales, together with all the Bays, Harbours Rivers and Islands situate upon the said coast."

In 2001 the Kaurareg people successfully claimed native title rights over the island (and other nearby islands).

All content from Kiddle encyclopedia articles (including the article images and facts) can be freely used under Attribution-ShareAlike license, unless stated otherwise. Cite this article:
Possession Island (Queensland) Facts for Kids. Kiddle Encyclopedia.