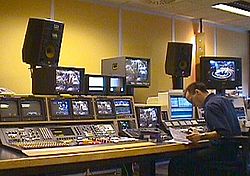 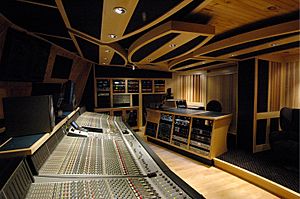 Post-production is part of filmmaking, video production and photography processes. It is a major part in the making of motion pictures, television programs, radio programs, advertising, audio recordings, photography, and digital art. It is a term for all stages of production occurring after the actual end of filming. Along with pre-production and production, it is one of the three phases of creating a movie or program.

Typically, the post-production phase of creating a movie or program takes longer than the actual shooting. It can take several months to complete because it is many different processes grouped under one name. These typically include:

All content from Kiddle encyclopedia articles (including the article images and facts) can be freely used under Attribution-ShareAlike license, unless stated otherwise. Cite this article:
Post-production Facts for Kids. Kiddle Encyclopedia.