Potts Point is a small, densely populated suburb of inner-city Sydney, Australia. Potts Point is located 3 kilometres east of the Sydney central business district and is part of the local government area of the City of Sydney.

Potts Point sits on a ridge immediately east of Woolloomooloo, west of Elizabeth Bay and Rushcutters Bay and north of Darlinghurst. The suburb has a roughly trapezoidal shape, and at its greatest extent is no more than 1 kilometre long by 200 metres wide. Potts Point's eastern boundary is Macleay Street. The suburb's other boundaries include Darlinghurst Road to the southeast, William Street to the south, Brougham Street and part of Cowper Road to the west.

Kings Cross is not an officially designated suburb of Sydney, but rather a locality encompassed entirely by the suburbs of Potts Point and Elizabeth Bay. Kings Cross is a commercial area that is dominated by bars, restaurants, nightclubs, and adult bookstores. Kings Cross railway station is situated beneath Darlinghurst Road and the Garden Island facility of the Royal Australian Navy sits on the north end of Potts Point.

Potts Point is named for Joseph Hyde Potts, who was employed by the Bank of New South Wales. He purchased six-and-a-half acres of harbourside land in an area then known as Woolloomooloo Hill – which he renamed Potts Point.

Much of the area that today comprises Potts Point and the adjacent suburb of Elizabeth Bay, originally constituted part of a land grant to Alexander Macleay, who was the New South Wales Colonial Secretary from 1826 to 1837, and for whom Macleay Street is named. NSW Judge Advocate, John Wylde (for whom Wylde Street is named) was another 19th-century public servant who owned land in the area. 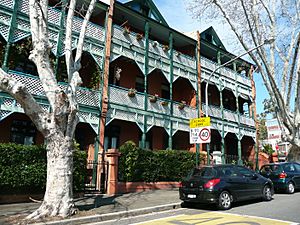 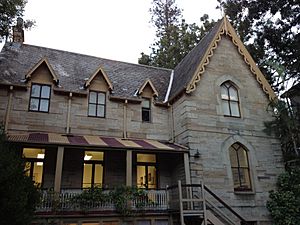 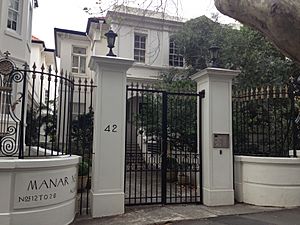 The area was further subdivided after Macleay's time, and a number of grand Georgian mansions were built along the high point of the suburb's ridge line. Several of these survive (albeit much hemmed in by later buildings), including 'Rockwall House' and 'Tusculum'. Rockwall House, located in Rockwall Crescent, is a two-storey (plus cellar) sandstone villa with five bays and a verandah that encircles the house. It was one of the earlier homes designed by architect John Verge and was built from 1831 to 1837. It is the only one of these which has a garden and is in private ownership. The building is now listed on the Register of the National Estate.

Tusculum, located in Manning Street, is a two-storey Regency mansion that was also designed by John Verge. His client was the merchant A. B. Spark, for whom the house was built in 1831–35. It was a twin to Rockwell House and was enlarged in the 1870s by the addition of verandahs on three sides. The first tenant was Bishop Broughton. Tusculum now serves as the headquarters for the NSW chapter of the Royal Australian Institute of Architects. Like Rockwall House, it is listed on the Register of the National Estate.

Kenilworth, was built on land that was originally part of the 1831 grant to Thomas Barker and was once a neighbour Barker's house, Rosyln Hall. The Roslyn Hall estate was subdivided into seven lots in 1860 and Roslyn Street was created. Around 1869, Kenilworth was built for Henry Williams. It remained in the hands of its original family until 1944 when it was sold to St Luke's Hospital.

Manar, in Macleay Street, is a complex of three blocks of flats dating from the original house c.1880 through to the Inter-war Free Classical style buildings of the 1920s. They are two to three stories in height with cement rendered masonry walls and terracotta tiles roofs. The 1920s wings were designed by the architectural practice of Ernest A Scott and Green (1911–1932), later known as Scott Green and Scott (1932–1947). Residents of Manar have included, Sir Mungo William MacCallum, Sydney Ure Smith, Sir Garfield Barwick, Senator John Ignatius Armstrong, Mary McEwen, widow of Sir John McEwen, and Mary Bailey-Tart, the only daughter of Sir Earle Page

Other heritage buildings in the area include the Mansions Terrace in Bayswater Road; the terrace and townhouse group extending from 13–29 Challis Avenue; the group of Late Victorian terraces from 1–13 Kellett Street; the gazebo in HMAS Kuttabul; and Bomera and Tarana on the corner of Wylde Street and Cowper Wharf Roadway. These buildings are all listed on the Register of the National Estate.

In 1871, Edmund Blacket built Stramshall in Macleay Street for the Hordern family of merchants. Thomas Rowe made further additions in 1877. The house was later known as Jenner House and was taken over by the Department of Defence, who sold it to the horse breeder Tony Peterson in 1998. Peterson sold the house for $15 million in 2009. The house was listed by the National Trust in 1967.

Most of the other mansions, such as Orwell, have survived only as street names. The area also boasts many fine Victorian-era terraces. These are chiefly located along Victoria Street, which bisects Potts Point from north to south, and is widely known for its impressive canopy of plane trees. 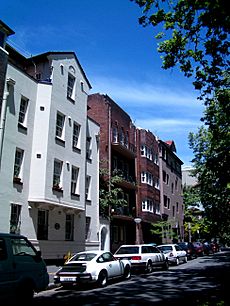 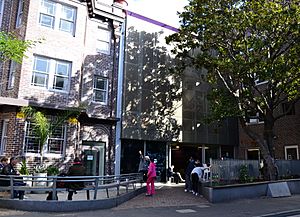 Potts Point was the site of some of Australia's earliest blocks of flats, and from the 1920s through to World War II the area was intensively developed along those lines. As a result, it boasts the highest concentration of Art Deco architecture in Australia. Amongst the most notable examples are the "Macleay Regis", "Cahors" and "Franconia" residential buildings in Macleay Street and "Carinthia" and "Carisbrooke" in Springfield Avenue. Arguably two of the finest Streamline Moderne buildings in Australia: the Minerva (or Metro) Theatre and the Minerva Building are in Orwell Street. The Metro Theatre (as it was then known) was designed by Bruce Dellit and built in 1940. It was the site of the first Australian production of the musical Hair in 1970, and is heritage-listed.

During the Vietnam War, the Darlinghurst Road precinct (commonly known as Kings Cross), which straddles Potts Point and Elizabeth Bay, became a popular destination for US military personnel on R&R – due chiefly to its proximity to a major naval facility. Dozens of hotels constructed at the time ensured that "The Cross" remained a tourism mecca well into the 1990s. In 1964, the Rev. Ted Noffs started the Wayside Chapel, an unorthodox Methodist ministry to the Kings Cross area. It began as a small drop-in centre in a block of flats at 29 Hughes Street, and grew into a complex that occupies two blocks of flats. It is a major welfare and community centre in the area.

At the turn of the 21st century, almost all of Potts Point's hotels were acquired by developers attracted by the area's proximity to transportation and amenities. By 2004 most tourist hotels had been converted or rebuilt as expensive unit developments, resulting in a rapid wider gentrification of the area – and increasingly large gay residents that make up a significant portion of affluent same-sex couples in Australia – although the continued presence of a number of large and small backpacker hostels in Victoria Street and surrounding streets and dozens of pubs, nightclubs, restaurants and similar venues have confirmed the suburb's role as one of Sydney's leading entertainment precincts.

In 2003-4 Sydney City Council undertook a major streetscape upgrade centred on Darlinghurst Road and the southern part of Macleay Street, involving footpath-widening, roadside tree-plantings and the installation of new paving, street furniture and lighting. Plans to force the replacement of historic neon shopfront and awning signage on strip clubs and other adult commercial premises in the area with generic signage proved more controversial and have not been implemented. 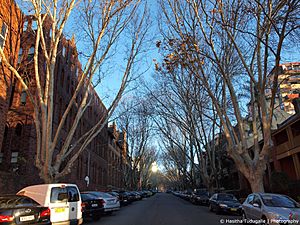 Victoria Street showing an avenue of plane trees which are iconic among the area.

Kings Cross railway station is an underground station at Potts Point, on the Eastern Suburbs railway line of the Sydney Trains network. The area is well served by Sydney Buses, with routes 311, 325, 326 and 327 passing through Potts Point.

Potts Point can be accessed on foot from Woolloomooloo. There is a number of stairways that connect the two neighbouring suburbs:

All content from Kiddle encyclopedia articles (including the article images and facts) can be freely used under Attribution-ShareAlike license, unless stated otherwise. Cite this article:
Potts Point, New South Wales Facts for Kids. Kiddle Encyclopedia.