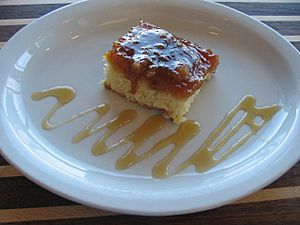 A piece of pouding chômeur

Pouding chômeur (The poor man’s pudding) is a dessert that was created by female factory workers early during the Great Depression in Quebec, Canada.

Today, it is casually served as a regional dessert, perhaps being a bit more popular during the saison des sucres, when maple sap is collected and processed and is usually part of the offerings during a meal at a sugar shack, but it is not specifically a maple dessert.

At the depth of the Depression, stale bread was also used in lieu of cake batter.

All content from Kiddle encyclopedia articles (including the article images and facts) can be freely used under Attribution-ShareAlike license, unless stated otherwise. Cite this article:
Pouding chômeur Facts for Kids. Kiddle Encyclopedia.