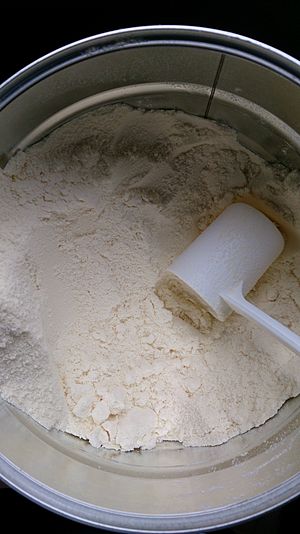 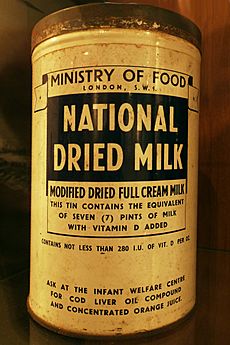 Modified dry whole milk, fortified with vitamin D. This is the original container from 1947, provided by the Ministry of Food in London, England

While Marco Polo wrote of Mongolian Tatar troops in the time of Kublai Khan who carried sun-dried skimmed milk as "a kind of paste", the first modern production process for dried milk was invented by the Russian doctor Osip Krichevsky in 1802. The first commercial production of dried milk was organized by the Russian chemist M. Dirchoff in 1832. In 1855, T.S. Grimwade took a patent on a dried milk procedure, though a William Newton had patented a vacuum drying process as early as 1837.

In modern times, powdered milk is usually made by spray drying nonfat skimmed milk, whole milk, buttermilk or whey. Pasteurized milk is first concentrated in an evaporator to approximately 50 percent milk solids. The resulting concentrated milk is then sprayed into a heated chamber where the water almost instantly evaporates, leaving fine particles of powdered milk solids.

Alternatively, the milk can be dried by drum drying. Milk is applied as a thin film to the surface of a heated drum, and the dried milk solids are then scraped off. However, powdered milk made this way tends to have a cooked flavour, due to caramelization caused by greater heat exposure.

Another process is freeze drying, which preserves many nutrients in milk, compared to drum drying.

The drying method and the heat treatment of the milk as it is processed alters the properties of the milk powder, such as its solubility in cold water, its flavour, and its bulk density. 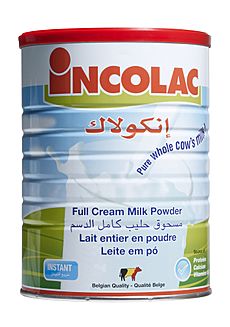 Powdered milk is frequently used in the manufacture of infant formula, confectionery such as chocolate and caramel candy, and in recipes for baked goods where adding liquid milk would render the product too thin. Powdered milk is also widely used in various sweets such as the famous Indian milk balls known as gulab jamun and a popular Indian sweet delicacy (sprinkled with desiccated coconut) known as chum chum (made with skim milk powder). Many no-cook recipes that use nut butters use powdered milk to prevent the nut butter from turning liquid by absorbing the oil.

Powdered milk is also a common item in UN food aid supplies, fallout shelters, warehouses, and wherever fresh milk is not a viable option. It is widely used in many developing countries because of reduced transport and storage costs (reduced bulk and weight, no refrigerated vehicles). Like other dry foods, it is considered nonperishable, and is favored by survivalists, hikers, and others requiring nonperishable, easy-to-prepare food.

All content from Kiddle encyclopedia articles (including the article images and facts) can be freely used under Attribution-ShareAlike license, unless stated otherwise. Cite this article:
Milk powder Facts for Kids. Kiddle Encyclopedia.