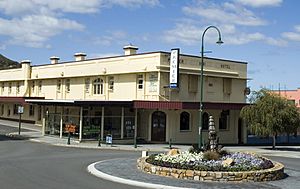 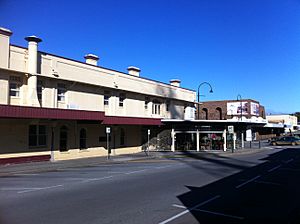 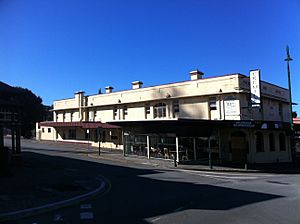 The Premier Hotel is a hotel and a heritage listed building located on the corner of York Street and Grey Street, opposite the Albany Town Hall, in Albany in the Great Southern region of Western Australia.

The two storey building is constructed from brick and has a corrugated iron roof topped with chimneys that have moulded capping. It has arched windows on both levels with a cantilevered canopy over the surrounding pavement.

The hotel was built in 1891 and was the third one built in Albany. Only the Premier and the Albany Hotel still remain. The other, the Railway Hotel, was renamed the Royal George in 1892 and rebuilt in three stories in 1910. The first meeting of the Albany Roads Board was held in the hotel dining room in 1896.

Richard R. Burridge acquired the hotel in 1912 - the licensee was Marcus A. O'Grady.

Following Burridge's death in 1928, the hotel was auctioned in 1929 and acquired by William Harper for £6,550. Harper was the licensee of the Freemason's hotel located on Stirling Terrace. Harper also outbid the then licensee of the Premier Hotel, Alf Martin. At that time the hotel had 20 bedrooms, a sitting and dining room, offices and two large bar areas.

In 1930 the hotel was put on the market again and advertised as having: 26 bedrooms, bars, dining room, commercial rooms, bathrooms, hot water service, and electric light installed and sewered throughout.

W.A. Schurer, who had previously owned the London Hotel, acquired the Premier in 1936 and put it up for sale again in 1950.

The hotel was gutted by fire in 2016. The Licensee was later found to have organised the attack in an attempt to claim a $3M dollar insurance payout.

All content from Kiddle encyclopedia articles (including the article images and facts) can be freely used under Attribution-ShareAlike license, unless stated otherwise. Cite this article:
Premier Hotel, Albany Facts for Kids. Kiddle Encyclopedia.