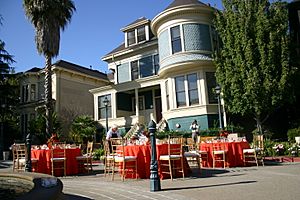 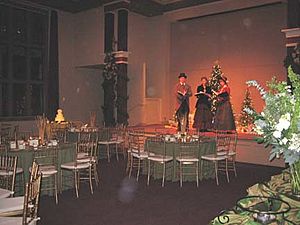 Preservation Park is located in Oakland, California. The park includes sixteen historic buildings, five of which stand in their original location, and eleven of which were moved from elsewhere in Oakland to avoid demolition. The sixteen houses are arranged to resemble a late 19th-century Oakland neighborhood.

The sixteen buildings are:

In addition, there are two other significant structures: the bandstand and the Latham-Ducel Fountain. The cast iron fountain was forged in Paris and features the moon goddess Diana with acanthus leaf ornament. It originally stood at Latham House and Gardens, originally located at what is now 17th and Jackson Streets.

The park is bordered by 12th Street, Castro Street, 14th Street and Martin Luther King, Jr. Way. 13th Street goes into the park and ends at the Latham-Ducel Fountain. Preservation Park Way, a one-way street, starts at the fountain, and ends at 12th Street.

All content from Kiddle encyclopedia articles (including the article images and facts) can be freely used under Attribution-ShareAlike license, unless stated otherwise. Cite this article:
Preservation Park Facts for Kids. Kiddle Encyclopedia.