Prince Alexander of Yugoslavia (13 August 1924 – 12 May 2016) was the elder son of Prince Paul, who served as Regent of Yugoslavia in the 1930s, and his wife, Princess Olga of Greece and Denmark.

Alexander was born at White Lodge, Richmond Park, United Kingdom, and was approximately 1374th in the Line of succession to the British throne. As a nephew of Princess Marina, Duchess of Kent (née of Greece and Denmark), he was a first cousin of Prince Edward, Duke of Kent, Prince Michael of Kent, and Princess Alexandra, The Honourable Lady Ogilvy; he was also a first cousin once removed of Prince Philip, Duke of Edinburgh.

On 12 February 1955, Alexander married Princess Maria Pia of Savoy, daughter of King Umberto II of Italy and of his wife, Princess Marie José of Belgium. The marriage took place at Cascais in Portugal where the bride's father was living in exile. The couple had met on 22 August 1954 during the royal cruise of the Agamemnon, hosted by King Paul and Queen Frederica of the Hellenes.

Alexander and Maria Pia have twin sons born in 1958, a second pair of twins being born during the marriage five years later:

Alexander and Maria Pia divorced in 1967, and in 2003 she married Prince Michel of Bourbon-Parma, himself divorced from Princess Yolande de Broglie-Revel.

The Prince wished to serve in the British Royal Air Force during World War Two, but was initially prevented by his father's political affiliations. He was eventually commissioned in the RAF through the intervention of Prince George, Duke of Kent, his uncle. , After the war, he sought employment as a pilot joining British European Airways in 1951, and subsequently engaging also in many aeronautic competitions. 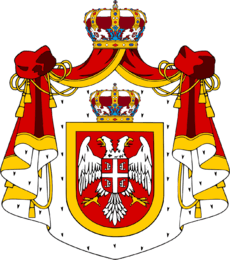 Alexander was one of the four founding members of the Serbian Unity Congress. He was patron of the Center for Research of Orthodox Monarchism.

On 17 February 2008, Alexander issued a statement condemning the declaration of independence by Kosovo.

On the occasion of Prince Alexander's 90th birthday on 13 August 2014, a celebration of his life in words and pictures appeared in that month's UK magazine Majesty.

Prince Alexander died on 12 May 2016 in Paris, where he and his wife had lived for many years. He was buried at Oplenac, Serbia, with his parents and brother, his coffin being carried by Serbian Air Force fighter pilots.

All content from Kiddle encyclopedia articles (including the article images and facts) can be freely used under Attribution-ShareAlike license, unless stated otherwise. Cite this article:
Prince Alexander of Yugoslavia (born 1924) Facts for Kids. Kiddle Encyclopedia.