Prince Charles Island is a large, low-lying island with an area of 9,521 km2 (3,676 sq mi), making it the world's 77th largest island and the 19th largest island in Canada. It is located in Foxe Basin, off the west coast of Baffin Island, in the Qikiqtaaluk Region of Nunavut, Canada. Despite the island's size, it was not discovered until 1932, when the tug captain W. A. Poole first sighted it. His information never made it onto any published map. It was rediscovered in 1948 by Albert-Ernest Tomkinson navigating an Avro Lancaster for the RCAF 408 (Photo) Squadron, though it was likely known to the local Inuit long before that. The island was named for Prince Charles, who was born the same year. The island is uninhabited and its temperatures are extremely cold. 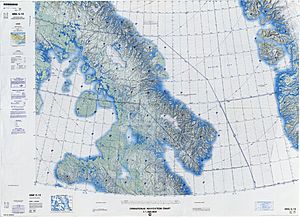 All content from Kiddle encyclopedia articles (including the article images and facts) can be freely used under Attribution-ShareAlike license, unless stated otherwise. Cite this article:
Prince Charles Island Facts for Kids. Kiddle Encyclopedia.