The Princess Margaret Rose Cave is a limestone cave located in Lower Glenelg National Park in Victoria, Australia. The cave features actively growing stalactites, stalagmites and helictites. It is arguably the most decorated cave per square metre in Australia. It is named after Princess Margaret. 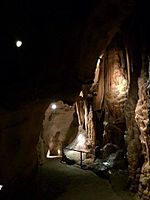 The cave was discovered in 1936 by S. McEachern, J. "Bunny" Hutchesson and the latter's son Alan. They developed the cave as a tourist attraction, with Bunny Hutchesson acting as the first permanent guide, conducting tours from 1941. The cave has been part of Lower Glenelg National Park since 1980. Guided tours of the cave are conducted on most days, lasting about half an hour.

The caves are formed in poorly consolidated Tertiary limestone laid down in a shallow sea in the Oligocene and early Miocene geological epochs, between about 35 and 15 million years ago.

All content from Kiddle encyclopedia articles (including the article images and facts) can be freely used under Attribution-ShareAlike license, unless stated otherwise. Cite this article:
Princess Margaret Rose Cave Facts for Kids. Kiddle Encyclopedia.