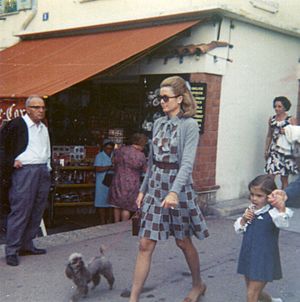 Princess Stéphanie walking with her mother in 1969

Stéphanie was born to Rainier III and Grace Kelly on 1 February 1965 at Prince's Palace in Monaco. She is the youngest of their three children, after Caroline and Albert II. Her godparents are her maternal uncle John B. Kelly Jr. and paternal first cousin Elisabeth-Anne de Massy. Her mother, who described Stéphanie as a "warm, bright, amusing, intelligent and capable girl" and a "good athlete", lovingly called her "wild child" (French: enfant terrible).

On 13 September 1982, while returning home from their farm in Rocagel, France, Stéphanie and her mother had a car accident. Grace died the next day, on September 14, while Stéphanie sustained a hairline fracture of a neck vertebra. Although the official version was that Grace suffered a stroke while driving, rumors began that Stéphanie, who had to miss her mother's funeral due to her recovery, was the one actually driving. Stéphanie herself refused to speak publicly about her mother's death until 1989, when she gave an interview to the author Jeffrey Robinson, insisting that the story was untrue. She said, "There was a lot of pressure on me because everyone was saying that I had been driving the car, that it was all my fault, that I'd killed my mother... It's not easy when you're 17 to live with that." She did not discuss the subject again until a 2002 interview with the French magazine Paris Match in which she repeated her earlier denial, and discussed the trauma of being beside her mother at the time of the accident. She said, "Not only did I go through the horrible trauma of losing my mother at a very young age, but I was beside her at the moment of the accident. Nobody can imagine how much I've suffered, and still suffer."

Stéphanie was educated at the Dames de Saint-Maur in Monaco, and then at the école and collège Dupanloup in Boulogne-Billancourt, France. Stéphanie received her baccalauréat from the Cours Charles de Foucauld in 1982. During her school years, she studied classical dance and piano, and also competed in gymnastics and horse riding. She also attended Camp Oneka, an all-girls' summer camp in the Pocono Mountains, in America, where both her sister and mother had attended previously.

In 1983, after her physical recovery from the accident which killed her mother, Stéphanie started an apprentice programme at Christian Dior under the direction of head designer Marc Bohan. The following year, she debuted as a model on the biannual haute couture special published by Spanish magazine ¡Hola!, a venture that she repeated in 1990. In 1985, Stéphanie covered German Vogue and the American edition of Vanity Fair. She also became the spokesman of the Swiss beauty line La Prairie, for which she was photographed by Horst, and she appeared on the cover of French Vogue, photographed by the late Helmut Newton, in September 1986. 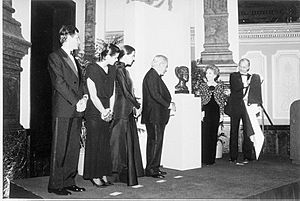 In 1986, Stéphanie launched a swimwear line Pool Position with Alix de la Comble, whom she had met during her internship at Dior. The fashion show to present the line, held at the Sporting Club in Monaco and attended by Prince Rainier III, Prince Albert and Princess Caroline, was a major event covered by the worldwide media. In 1989, Stéphanie launched her own self-titled perfume.

Stéphanie co-owns Replay cafes and stores in both Monaco and Barcelona. In December 2008, she guest-edited and covered the Vogue Paris.

In February 1986, Stéphanie self-produced and released her first single with the French label Carrere, under the production of Yves Roze. The song "Ouragan" and its English version "Irresistible" were both international hits, reportedly selling more than 2 million copies. "Ouragan" is one of the best-selling singles in France of all time. The full album Besoin, released as Stéphanie in some countries, sold more than 1.5 million, with 100,000 in France. The single "Flash", as well as its English version "One Love to Give," also achieved success throughout Europe. In January 1987, Stéphanie released the single "Young Ones Everywhere" to benefit UNICEF.

The same year, Stéphanie moved to Los Angeles to record a new album. However, it took her five years to release it. The album Stéphanie, released in 1991, met with disappointing sales and negative reviews, despite the promotional tour that included a performance on The Oprah Winfrey Show. Stéphanie then ended her music career after recording "In the Closet" with Michael Jackson for his album Dangerous. The song became a worldwide hit and reached the top 10 in the United States but Stéphanie was credited on the single under the alias "Mystery Girl" and her involvement in the song was not revealed until a few years later. She made a brief return to singing in 2006, when she recorded "L'Or de nos vies", a charity single, along with her foundation Fight AIDS.

Template:Monegasque Princely Family Stéphanie is the president of several associations, including Monaco Youth Centre and Princess Stéphanie Activity Centre, and is an honorary board member of the Princess Grace Foundation – United States. She has also been the patron of the International Circus Festival of Monte-Carlo, which she regularly attends, and the World Association of Children's Friends (AMADE), which was founded in 1963 by her mother Grace, Princess of Monaco. Since 1985, Stéphanie has been the president of the Monte-Carlo Magic Grand Prix and the International Festival of Amateur Theatre. She is also the president of the Théâtre Princesse Grace.

In 2003, Stéphanie created her own Women Face the AIDS Association, which became Fight AIDS Monaco in 2004, in order to support people living with HIV and to combat the social stigma attached to the disease. Since 2006, Stéphanie has been a Joint United Nations Programme on HIV/AIDS (UNAIDS) ambassador. The same year, along with the group of singers, she released a charitable single "L'Or de nos vies". On 26 June 2010, Stéphanie inaugurated, in the presence of Prince Albert, the House of Life (French: Maison de Vie) in Carpentras, Vaucluse, France, which offers both psychological and material aid to persons living with either HIV and AIDS and their families. Stéphanie has organised numerous events, such as auction sales, concerts and galas, to support her foundation.

The couple have two children, Louis, and Pauline Ducruet, born in 1992 and 1994 respectively at Princess Grace Hospital Centre in Monaco. The children were included in the line of succession to the Monegasque throne when Stéphanie married Ducruet on 1 July 1995 at Monaco town hall. The couple divorced on 4 October 1996.

Stéphanie gave birth to her third child, Camille Gottlieb, on 15 July 1998 at Princess Grace Hospital Centre. Although she did not identify the father's name on the birth certificate, many suspected, from the start, that Camille's father is Jean Raymond Gottlieb and, indeed, Camille herself has acknowledged Gottlieb as her father. As her parents never married, Camille is not included in the line of succession to the Monegasque throne. 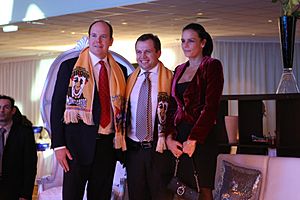 Stéphanie and her brother Albert (far left) in August 2013

In 2001, Stéphanie began a relationship with married elephant trainer Franco Knie and moved, along with her three children, into Knie's circus caravan. However, that relationship came to an end in 2002, and Stéphanie and her family returned to Monaco. On 12 September 2003, Stéphanie married Portuguese acrobat Adans Lopez Peres, a member of Knie's circus ensemble. The marriage ended in divorce on 24 November 2004.

Stéphanie is the godmother to Andrea Casiraghi, the eldest son of her sister Princess Caroline.

Princess Stéphanie and her family live in the Villa Clos Saint-Martin in Monaco-ville.

All content from Kiddle encyclopedia articles (including the article images and facts) can be freely used under Attribution-ShareAlike license, unless stated otherwise. Cite this article:
Princess Stéphanie of Monaco Facts for Kids. Kiddle Encyclopedia.