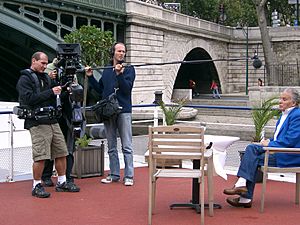 A movie crew at work during principal photography

Principal photography is the part of movie making when a movie is being filmed. It is after pre-production and before post-production.

Principal photography is usually the most expensive part of movie making. This is partly because the cost includes salaries for the actors and crew. It is also because some movie scenes are expensive if they include special props or special effects that are done on the set.

Feature movies usually have insurance when principal photography starts. This is in case something happens that makes the movie cost more to make. For example, if one of the actors dies before filming all his or her scenes, the scenes might have to be filmed again with a different actor. If sets or finished parts of the movie are destroyed, it might even be impossible to finish the movie.

All content from Kiddle encyclopedia articles (including the article images and facts) can be freely used under Attribution-ShareAlike license, unless stated otherwise. Cite this article:
Principal photography Facts for Kids. Kiddle Encyclopedia.