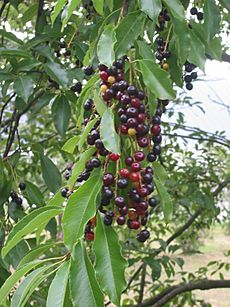 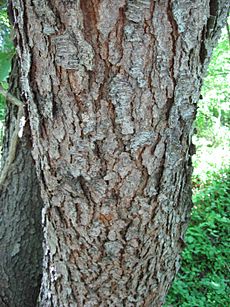 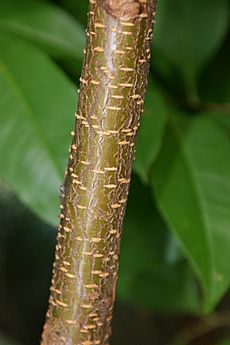 Black cherry is closely related to the chokecherry (P. virginiana); chokecherry, however, tends to be shorter (a shrub or small tree) and has smaller, less glossy leaves.

For about its first decade the bark of a black cherry tree is thin, smooth, and banded, resembling a birch. A mature tree has very broken, dark grey to black bark. The leaves are long and shiny, resembling a sourwood’s. An almond-like odor is released when a young twig is scratched and held close to the nose, revealing minute amounts of cyanide compounds produced and stored by the plant as a defense mechanism against herbivores.

Prunus serotina has the following subspecies and varieties:

Prunus serotina is a pioneer species. In the Midwest, it is seen growing mostly in old fields with other sunlight-loving species, such as black walnut, black locust, and hackberry. Gleason and Cronquist (1991) describe P. serotina as "[f]ormerly a forest tree, now abundant as a weed-tree of roadsides, waste land, and forest-margins". It is a moderately long-lived tree, with ages of up to 258 years known, though it is prone to storm damage, with branches breaking easily; any decay resulting, however, only progresses slowly. Seed production begins around 10 years of age, but does not become heavy until 30 years and continues up to 100 years or more. Germination rates are high, and the seeds are widely dispersed by birds and bears who eat the fruit and then excrete them. Some seeds however may remain in the soil bank and not germinate for as long as three years. All Prunus species have hard seeds that benefit from scarification to germinate (which in nature is produced by passing through an animal's digestive tract).

Prunus serotina was widely introduced into Western and Central Europe as an ornamental tree in the mid 20th century, where it has become locally naturalized. It has acted as an invasive species there, negatively affecting forest community biodiversity and regeneration. 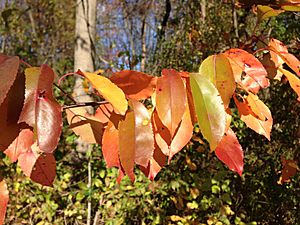 Like apricots and apples, the seeds of black cherries contain cyanogenic glycosides, compounds that can be converted into cyanide, such as amygdalin. These compounds release hydrogen cyanide when the seed is ground or minced, which releases enzymes that break down the compounds. These enzymes include amygdalin beta-glucosidase, prunasin beta-glucosidase and mandelonitrile lyase. In contrast, although the flesh of cherries also contains these compounds, it does not contain the enzymes needed to produce cyanide, so the flesh is safe to eat.

The foliage, particularly when wilted, also contains cyanogenic glycosides, which convert to hydrogen cyanide if eaten by animals. Farmers are recommended to remove any trees that fall in a field containing livestock, because the wilted leaves could poison the animals. Removal is not always practical, though, because they often grow in very large numbers on farms, taking advantage of the light brought about by mowing and grazing. Entire fencerows can be lined with this poisonous tree, making it difficult to monitor all the branches falling into the grazing area. Black cherry is a leading cause of livestock illness, and grazing animals' access to it should be limited. 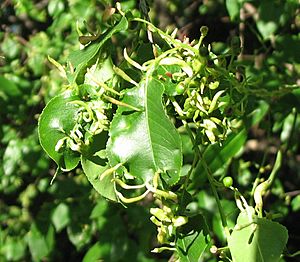 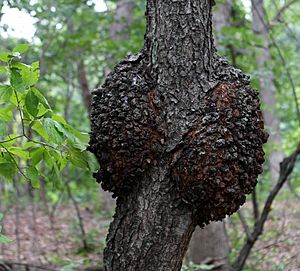 P. serotina is a host of caterpillars of various Lepidoptera (see List of Lepidoptera which feed on Prunus). The eastern tent caterpillar defoliates entire groves some springs.

Known as capolcuahuitl in Nahuatl (the source of the capuli epithet), it was an important food in pre-Columbian Mexico. Native Americans ate the berries.

The wood of Prunus serotina is also used as a spice in foods, as it imparts a unique flavor.

Prunus serotina timber is valuable; perhaps the premier cabinetry timber of the U.S., traded as "cherry". High quality cherry timber is known for its strong orange hues and high price. Low-quality wood, as well as the sap wood, can be more tan. Its density when dried is around 580 kg/m3 (36 lb/cu ft).

All content from Kiddle encyclopedia articles (including the article images and facts) can be freely used under Attribution-ShareAlike license, unless stated otherwise. Cite this article:
Prunus serotina Facts for Kids. Kiddle Encyclopedia.