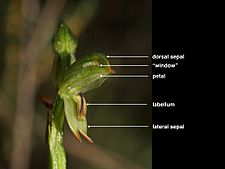 The small-flowered leafy greenhood was first formally described in 2006 by David Jones and Mark Clements and given the name Bunochilus diminutus. The description was published in Australian Orchid Research from a specimen collected in the Deep Lead Reserve near Stawell. In 2007, Gary Backhouse changed the name to Pterostylis diminuta. The specific epithet (diminuta) is from "the Latin diminutus, diminished, made small, in reference to the smaller flowers and floral parts of this species when compared with B. melagrammus" (Pterostylis melagramma).

Pterostylis diminuta occurs in grassy or shrubby woodland and forest between Ballarat and the Grampians in Victoria.

All content from Kiddle encyclopedia articles (including the article images and facts) can be freely used under Attribution-ShareAlike license, unless stated otherwise. Cite this article:
Pterostylis diminuta Facts for Kids. Kiddle Encyclopedia.