Pterostylis grandiflora is a terrestrial, perennial, deciduous, herb with an underground tuber and when not flowering, a rosette of four to nine egg-shaped leaves. Each leaf is 4–20 mm long and 3–10 mm wide. Flowering plants have a single flower 27–35 mm long and 17–23 mm wide borne on a spike 150–150 mm high with four to nine stem leaves wrapped around it. The flowers are white with green and deep red-brown stripes and markings. The dorsal sepal and petals are fused, forming a hood or "galea" over the column. The dorsal sepal curves forward with a thread-like tip 3–5 mm long. The lateral sepals are erect and held closely against the galea and there is a broad, flat, platform-like protruding sinus between their bases. The labellum is 17–20 mm long, about 3 mm wide and reddish-brown and protrudes above the sinus. Flowering occurs from May to August. 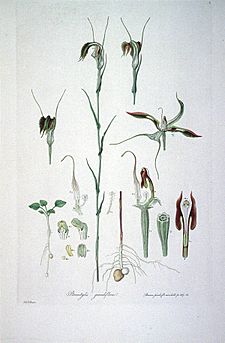 The cobra greenhood grows in moist shady places in forest on the coast and tablelands of southern Queensland, New South Wales, Victoria and Tasmania.

Although easier to grow than many other greenhoods, the superb greenhood is mainly only grown by orchid enthusiasts. It must be kept dry in the dormant stage and kept moist in 50% sunlight during the growth and flowering stage.

All content from Kiddle encyclopedia articles (including the article images and facts) can be freely used under Attribution-ShareAlike license, unless stated otherwise. Cite this article:
Pterostylis grandiflora Facts for Kids. Kiddle Encyclopedia.