Pterostylis leptochila, commonly known as the Ravensthorpe rufous greenhood or narrow-lipped rustyhood is a plant in the orchid family Orchidaceae and is endemic to the south-west of Western Australia. Both flowering and non-flowering plants have a relatively large rosette of leaves. Flowering plants also have up to five large translucent white flowers with olive green and brown lines and markings and a narrow, insect-like labellum. 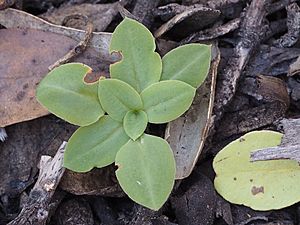 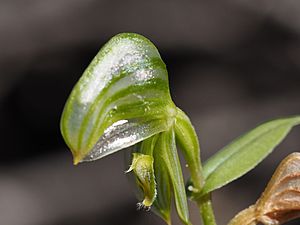 Pterostylis leptochila was first formally described in 1989 by Mark Clements and David Jones from a specimen collected near Ravensthorpe and the description was published in Australian Orchid Research. The specific epithet (leptochila) is derived from the Ancient Greek words leptos meaning "fine" or "small" and cheilos meaning "lip" or "rim" referring to the narrow labellum of this orchid.

The Ravensthorpe rufous greenhood grows in rocky soil in woodland and shrubland between Jerramungup and Ravensthorpe in the Esperance Plains and Mallee biogeographic regions.

Pterostylis leptochila is classified as "not threatened" by the Western Australian Government Department of Parks and Wildlife.

All content from Kiddle encyclopedia articles (including the article images and facts) can be freely used under Attribution-ShareAlike license, unless stated otherwise. Cite this article:
Pterostylis leptochila Facts for Kids. Kiddle Encyclopedia.