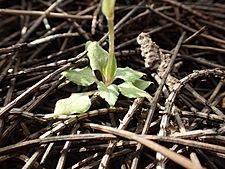 Pterostylis microphylla was first formally described in 2014 by David Jones and Christopher French from a specimen collected near Gull Rock Road east of Albany and the description was published in Australian Orchid Review. The specific epithet (microphylla) is derived from the Ancient Greek words mikros meaning "small" or "little" and phyllon meaning "leaf".

The small rosette snail orchid grows under dense shrubs in swampy places between Augusta and Albany in the Jarrah Forest and Warren biogeographic regions.

Pterostylis microphylla is listed as "not threatened" by the Government of Western Australia Department of Parks and Wildlife.

All content from Kiddle encyclopedia articles (including the article images and facts) can be freely used under Attribution-ShareAlike license, unless stated otherwise. Cite this article:
Pterostylis microphylla Facts for Kids. Kiddle Encyclopedia.