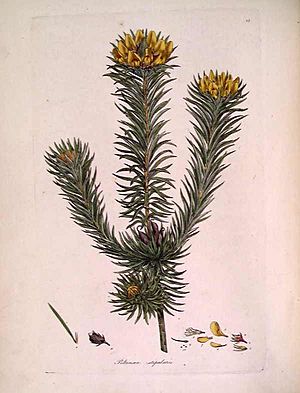 An illustration of Pultenaea stipularis by James Sowerby which appeared in A Specimen of the Botany of New Holland in 1794.

Pultenaea is a genus of flowering plants in the family Fabaceae-Faboideae that are native to Australia. They are known commonly as bush peas.

The genus is found in south west Western Australia and the eastern states. It is not considered to be monophyletic with suggestions of splitting it into six separate subgenera, under a larger genus of Pultenaea sensu lato, which would include 19 out of 25 genera included in the former tribe Mirbelieae. The genus underwent explosive starburst radiation, with biogeographical divisions due to the Nullarbor Plain and the winter/summer rainfall boundary. Some species rely on fire regimes for germination, and are an understorey dominant and nitrogen fixer.

The genus was first formally described by botanist James Edward Smith in 1794 in A Specimen of the Botany of New Holland, with Pultenaea stipularis nominated as the type species. The latter was described from a living specimen which was raised in Stockwell, England from seed obtained from New South Wales in 1792. Smith named the genus in honour of Richard Pulteney, an English surgeon and botanist, who also was the biographer of Linnaeus.

Pultenaea belongs to the Mirbelioid clade of the legume subfamily Faboideae. Pultenaea is paraphyletic with respect to several of the other mirbelioid genera. Molecular phylogenetics supports 7 clades within the current circumscription of Pultenaea:

The Mirbelioids have had long isolation in Australia from other Fabaceae families. Pultenaea Sm. underwent explosive starburst radiation during the late Miocene, due to aridity. Geographic speciation factors include east vs. west endemism due to increased aridity and the development of the Nullarbor Plain; subgenera Pultenaea and Corrickosa of eastern Australia split along the Winter–Summer rainfall boundary; subclades within Corrickosa diverged due to marine incursions between South Australia and Victoria. Western Australian species include disjunctions between north and south, and Esperance/Cape Arid. Recent extinctions, possibly due to changed fire regimes and grazing pressure, include P. elusa and P. maidenii. 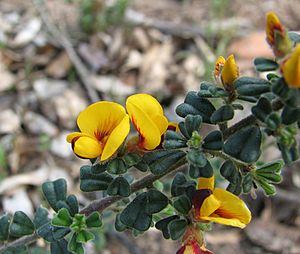 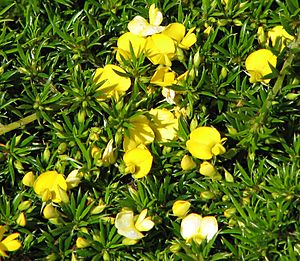 Pultenaea Sm. are restricted to south west Western Australia and temperate and tropical regions of the eastern states of Australia. They are found in sclerophyllous vegetation types varying from forests to heath lands, but absent from arid interior and rainforest regions. Its distribution indicates that the genus is limited by water (arid regions) and sunlight/competition (tropical regions). Eastern Australia contains 87 species,while Western Australia contains 27 species. Four species are found in both regions.

Pultenaea species are understorey dominants, play a role of nutrient cycling as nitrogen fixers, and are an important food source for invertebrates. Like many species of Fabaceae, hard-seeded Pultenaea species require fire for germination and recruitment e.g. P. williamsoniana. A periodic fire regime of at least ten years is needed to allow for maturity. Pultenaea species can be locally abundant, and are abundant along roadsides, possibly due to increased light or disturbance. Threats include clearance and fragmentation of habitat, inappropriate fire regimes, weed invasion, and grazing, which may have led to extinctions of P. elusa and P. maidenii

A number of species are cultivated for their spring flower display. Most of these are fast-growing and adaptable to diverse growing conditions. Propagation is from semi-mature cuttings or seed pre-treated by soaking in hot water.

Three cultivars are registered with the Australian Cultivar Registration Authority:

All content from Kiddle encyclopedia articles (including the article images and facts) can be freely used under Attribution-ShareAlike license, unless stated otherwise. Cite this article:
Pultenaea Facts for Kids. Kiddle Encyclopedia.