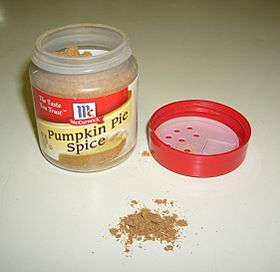 A container of pumpkin pie spice

Pumpkin pie spice, also known as pumpkin spice, is an American spice mix commonly used as an ingredient in pumpkin pie. Pumpkin pie spice is similar to the British and Commonwealth mixed spice. It is generally a blend of ground cinnamon, nutmeg, ginger, cloves, and sometimes allspice. It can also be used as a seasoning in general cooking.

A recipe for this combination includes:

A "Pompkin" recipe calling for a similar spice mix (mace, nutmeg and ginger) can be found as far back as 1796 in the first known published American cookbook, American Cookery, written by Amelia Simmons:

No. 1. One quart stewed and strained, 3 pints cream, 9 beaten eggs, sugar, mace, nutmeg and ginger, laid into paste No. 7 or 3, and with a dough spur, cross and chequer it, and baked in dishes three quarters of an hour.

Pumpkin pie spice has been referenced in cookbooks dating to the 1890s. In recognition of its popularity, it is now available ready-mixed by several companies including McCormick & Company, Trader Joe's and Frontier Natural Products Co-op. As of 2016, pumpkin spice consumables produce $500 million in annual sales. The spice is often referred to in the context of a Pumpkin Spice Latte from Starbucks, with the company selling more than 200 million lattes between its launch and 2013, generating revenue at a rate of at least $80 million a year in some seasons.

All content from Kiddle encyclopedia articles (including the article images and facts) can be freely used under Attribution-ShareAlike license, unless stated otherwise. Cite this article:
Pumpkin pie spice Facts for Kids. Kiddle Encyclopedia.