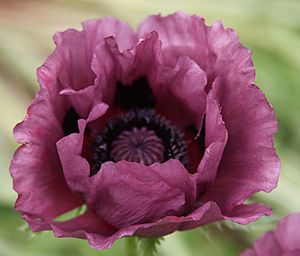 A purple poppy, on which the symbol is based

The purple poppy is a symbol of remembrance in the United Kingdom for animals that served during wartime. The symbol was created in 2006 based on the principle of the traditional red remembrance poppy for Remembrance Day.

In contemporary service, most animals in United Kingdom military service are military working dogs, particularly in the 1st Military Working Dog Regiment. Historically the greatest number of animal casualties in conflict have been horses and ponies.

The purple poppy was created in 2006 by the charity Animal Aid as a way to commemorate animals which served during conflicts as the charity viewed that they had been the forgotten victims of war. Approximately eight million horses and donkeys died during the First World War. It was created to be worn alongside red or white poppies. Animal Aid continued to sell the purple poppy with proceeds going to them until 2015 when they replaced the symbol with an enamel purple paw badge as they felt it was being misinterpreted — the animals are not "heroes" but victims. The purple poppy symbol was subsequently picked up by the Murphy's Army charity in 2016 and continued to be sold by them. 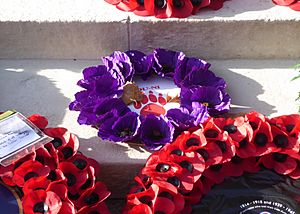 Wreath of purple poppies at The Cenotaph, Whitehall in London on the centenary of the end of World War I in 2018

The purple poppy was not endorsed by The Royal British Legion, which sells the official red remembrance poppies. However they did state: "We see no conflict in wearing the red poppy next to the purple or white poppy. Many animal rights supporters also support our work. We do ask that the items are not offered alongside each other however as this would confuse the public." Some towns have included purple poppies alongside red ones in official Remembrance displays.

All content from Kiddle encyclopedia articles (including the article images and facts) can be freely used under Attribution-ShareAlike license, unless stated otherwise. Cite this article:
Purple poppy Facts for Kids. Kiddle Encyclopedia.