The Museum tells the history of Australia's national airline Qantas, from its early beginnings in Outback Queensland in the 1920s to present day. Qantas was registered on 16 November 1920 and held its first Board Meeting in Winton in 1921 where it was decided to move operations to Longreach. The Qantas Founders Museum has a variety of interactive displays and exhibits telling the many stories of the airline over its 100-year history. 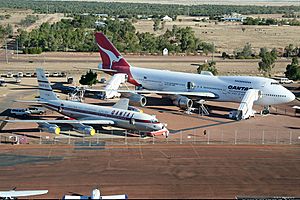 The Boeing 707-138B is the airline's first jet, a Boeing 707 short body, originally VH-EBA. The 707 was the first of its type and specifically manufactured for Qantas.

The Boeing 707-138B was restored at Southend Airport in England in mid-2006 and returned to Australia in December 2006 after 47 years since its original transfer from Boeing to the Qantas fleet. During its return the 707's flight path saw it eventually landing in Sydney, however it took a flight path of over a 31500 km and an eight-day journey from Southend Airport via Ireland, the Canary Islands, Bermuda, the United States and Fiji, to get to Sydney in 2006. It was then transported to Longreach in June 2007. The Australian government provided $1 million as a contribution to the cost of the aircraft's restoration.

The 707 held at the Qantas Founders Outback Museum was the first jet aircraft of any type owned by Qantas. The aircraft is known under the registration VH-EBA and the plane name "City of Canberra." The restoration of VH-EBA lasted 15,000 hours. The 707 VH-EBA was the first in its fleet and is a sister plane to the last 707 which was ordered by Qantas known previously under the registration "VH-EBM", and the plane name 'City of Launceston' that was owned and piloted by Qantas Ambassador John Travolta.

In September 2014 the Museum purchased a derelict Lockheed C-121 Constellation, a former US Navy C-121J (Bu No 131623) N4247K c/n 4144 that had been impounded at Manila International Airport for more than 25 years. The aircraft was disassembled for shipment to Australia. Over five years the interior and exterior of the Super Constellation was restored by volunteers and contractors to resemble the Qantas Super Constellation 'Southern Spray" VH-EAM. Restoration of this aircraft was completed in 2019 and will be on display to the public later in 2020.

In September 2019, work began on the construction of a $14.3 million Airpark Roof and Light and Sound Show Project. This project was funded by the Australian and Queensland Governments and is expected to be completed in 2020. The Airpark Roof will provide projection from the sun to Museum visitors and the Museum's Boeing 747, 707, DC-3 and Super Constellation. The Light and Sound Show will use state of the art light and sound technology to tell the history of Qantas by projecting onto the fuselage of the Boeing 747, Super Constellation and Boeing 707. The Light and Sound Show is expected to be completed and available to the public in 2020.

All content from Kiddle encyclopedia articles (including the article images and facts) can be freely used under Attribution-ShareAlike license, unless stated otherwise. Cite this article:
Qantas Founders Outback Museum Facts for Kids. Kiddle Encyclopedia.