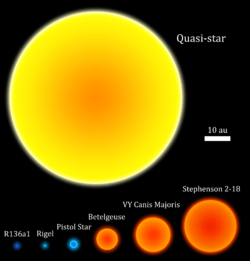 The size comparison of a Quasi-star with other stars.

Quasi-star, also known as black hole star, is hypothetically star are believed to have only existed of beginning of the universe when most a the material in the galaxy was hydrogen and helium. A Quasi-star could be as large as 10 billion kilometers or roughly large than 7.000 times the radius of the sun. Quasi-star is supermassive star with a central black hole and are both considered as potential progenitor for the formation of supermassive black hole. They are expeted to form from rapidly accreting protostars in massive primordial halos.

All content from Kiddle encyclopedia articles (including the article images and facts) can be freely used under Attribution-ShareAlike license, unless stated otherwise. Cite this article:
Quasi-star Facts for Kids. Kiddle Encyclopedia.