Ornithoptera alexandrae, the Queen Alexandra's birdwing, is the largest butterfly in the world, with females reaching wingspans slightly in excess of 25 cm (9.8 inches). This birdwing is restricted to the forests of the Oro Province in eastern Papua New Guinea.

The species is endangered, and is one of only three insects (the other two being butterflies as well) to be listed on Appendix I of CITES, making international trade illegal.

The species was discovered in 1906 by Albert Stewart Meek, a collector employed by Walter Rothschild to collect natural history specimens from New Guinea. In the next year, Rothschild named the species in honour of Alexandra of Denmark. Although the first specimen was taken with the aid of a small shotgun, Meek soon discovered the early stages and bred out most of the first specimens.

Though most authorities now classify this species in the genus Ornithoptera, it has formerly been placed in the genus Troides or the now defunct genus Aethoptera. In 2001 the lepidopterist Gilles Deslisle proposed placing it in its own subgenus (which some writers have treated as a genus); he originally proposed the name Zeunera, but this is a junior homonym (with Zeunera Piton 1936 [Orthoptera]), and his replacement is Straatmana.

Female: Female Queen Alexandra's birdwings are larger than males with markedly rounder, broader wings. The female can reach, and slightly exceed, a wingspan of 25 cm (9.8 in), a body length of 8 cm (3.1 in) and a body mass of up to 12 g (0.42 oz), all enormous measurements for a butterfly. The female has brown wings with white markings arranged as two rows of chevrons. The hindwings are brown with a submarginal line of centred yellow triangles. The body is cream coloured and there is a small section of red fur on the brown thorax.

Male: There is sexual dimorphism in this species. The wings are long with angular apices. They are iridescent bluish green with a black central band. There is a pronounced sex brand. The underside is green or blue green with black veins. Males are smaller than females. The abdomen is bright yellow. The wingspan of the males can be approximately 20 cm (8 in), but more usually about 16 cm (6.3 in). A spectacular form of the male is form atavus, which has gold spots on the hindwings.

The eggs are large, light yellow and flattened at the base, fixated to the surface on which they are laid by a bright-orange substance. Under ideal conditions, the female Queen Alexandra's birdwing is capable of laying over 240 eggs throughout its life. 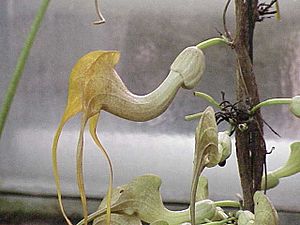 Pararistolochia (some species were formerly Aristolochia)

Newly emerged larvae eat their own eggshells before feeding on fresh foliage. The larva is black with red tubercles and has a cream-coloured band or saddle in the middle of its body.

Larvae of this species feed on the shell from which they hatched and then start to extract nutrients from pipe vines of the genus Pararistolochia (family Aristolochiaceae), including P. dielsiana and P. schlecteri. They feed initially on fresh foliage of the host plants and their own eggs, ultimately causing ringbark to the vine before pupating. Plants of the family Aristolochiaceae contain aristolochic acids in their leaves and stems. This is believed to be a potent vertebrate poison and is accumulated by larvae during their development.

The pupa is golden yellow or tan in colour with black markings. Male pupae may be distinguished by a faint charcoal patch on the wing cases; this becomes a band of special scales in the adult butterfly called a sex brand. The time taken for this species to develop from egg to pupa is approximately six weeks, with the pupal stage taking a month or more. Adults emerge from the pupae early in the morning while humidity is still high, as the enormous wings may dry out before they have fully expanded if the humidity drops.

The adults may live for three months or more and have few predators, excluding large orb weaving spiders (Nephila species) and some small birds. Adults feed at flowers providing a broad platform for the adults to land on, including Hibiscus. The adults are powerful fliers most active in the early morning and again at dusk when they actively feed at flowers.

Males also patrol areas of the host plants for newly emerged females early in the morning. Females may be seen searching for host plants for most of the day. Courtship is brief but spectacular; males hover above a potential mate, dousing her with a pheromone to induce mating. Receptive females will allow the male to land and pair, while unreceptive females will fly off or otherwise discourage mating. Males are strongly territorial and will see off potential rivals, sometimes chasing small birds as well as other birdwing species. Flight is usually high in the rainforest canopy, but both sexes descend to within a few meters of the ground while feeding or laying eggs..

All content from Kiddle encyclopedia articles (including the article images and facts) can be freely used under Attribution-ShareAlike license, unless stated otherwise. Cite this article:
Queen Alexandra's birdwing Facts for Kids. Kiddle Encyclopedia.