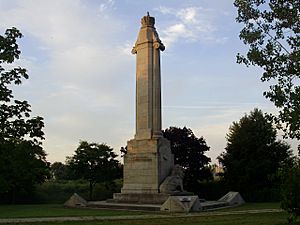 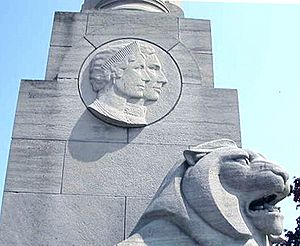 Sculpted profiles of King George VI and Queen Elizabeth, and the statue of a lion, are near the base of the monument

The stone monument consists of a column with a crown at the top on top of a base. On the face of the base section is a profile of the Queen and a stone lion is placed in front of the base. The monument was designed by architect William Lyon Somerville, who also designed the Henley Bridge of the QEW. Sculptor Frances Loring was commissioned to execute the stone lion. Florence Wyle modelled the royal profiles and crown. Loring started the lion after the entry of Britain and Canada into World War II and it inspired her design: "a snarling, defiant British Lion, eight feet high." Loring personally carved the lion herself from Queenston limestone. She fired her originally commissioned carver after he made unauthorized changes and took over the carving herself in the late summer and fall of 1940. The monument cost CA$23,000.

In 1972, the Government of Ontario announced a new expansion to eight lanes of the QEW at the Humber River, necessitating the removal of the monument. It was first proposed to be moved to Ontario Place but the proposed location spawned public criticism. Instead, the monument was moved in August 1975 to nearby Sir Casimir Gzowski Park along Lake Ontario, on the east side of the Humber River. It was re-dedicated in 1989 by Queen Elizabeth, by then styled and known as The Queen Mother.

The Queen Elizabeth Way was Ontario's first "super-highway" and it was adorned with decoration, such as its light standards and the Henley Bridge in St. Catharines, Ontario. The bridge is adorned with monuments at each end of the bridge in the area between the two directions of traffic. Each is a galley prow with four regal lions in the boat, each bearing a unique shield. There are also piers at each end, two decorated with sailing ships, a third of a native person and canoe and a fourth of a rower. These were designed by the same team that designed the Lion Monument. These remain in their original location.

All content from Kiddle encyclopedia articles (including the article images and facts) can be freely used under Attribution-ShareAlike license, unless stated otherwise. Cite this article:
Queen Elizabeth Way Monument Facts for Kids. Kiddle Encyclopedia.