Monarchy of Pakistan facts for kids 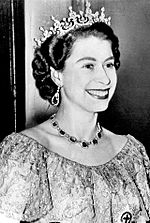 The monarchy of Pakistan was created by the Indian Independence Act of 1947. This act, made by the Parliament of the United Kingdom, divided its British India into two new countries: India and Pakistan, each of which became an independent constitutional monarchy. Succession to the throne of Pakistan was, like that of the United Kingdom, governed by the Act of Settlement 1701.

All content from Kiddle encyclopedia articles (including the article images and facts) can be freely used under Attribution-ShareAlike license, unless stated otherwise. Cite this article:
Monarchy of Pakistan Facts for Kids. Kiddle Encyclopedia.