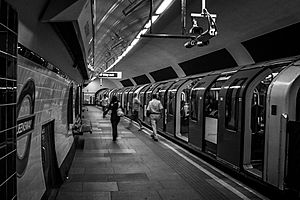 Queensway (formerly Queen's Road) is a shopping street in Bayswater, an area of west London. It is home to Whiteleys, many restaurants, cafés, pubs, souvenir shops and a few high-street retail chains. Queensway and Westbourne Grove are identified in the London Plan as one of 35 major centres in Greater London. The street is numbered the B411 in the British road numbering scheme. Queensway is currently undergoing a major redevelopment on all sides, with a building on the top of the road being developed for £500m, Whiteleys for £1.2BN and a series of other redevelopments happening at the same time.

Bayswater and Lancaster Gate were first developed as residential suburbs of London in the early 19th century. Bayswater Road, for example, the road at the Bayswater southern end (Bayswater Road) was already a long-established route across the countryside, and a road roughly following the present Queensway can be seen on early maps running north from Bayswater Road across fields under the name of Black Lion Lane. It was subsequently renamed Queen's Road in honour of Queen Victoria, who had been born at nearby Kensington Palace: a name, however, which somewhat lacked distinctiveness, for this reason the present name of Queensway was eventually substituted.

Near the northern end of the street is Whiteleys shopping, on the site of London's first department store, opened by William Whiteley in 1867. The store was awarded a Royal Warrant by Queen Victoria in 1896. The facade of the current building is from 1911, but the building itself was demolished and rebuilt in 1989.

In recent years, Queensway has become a centre for the entertainment and leisure industry in London. London's biggest ice rink, the Queen's Ice & Bowl in Queensway was recently renovated after investment and development by Robert Bourne (developer) and Bourne Capital. This has led the way for further developments in the area's entertainment and leisure industry. Queensway's retail industry is also booming with the famous Queensway Market showing significant growth in recent years.

It is reported that a wealthy Brunei family, in conjunction with Meyer Bergman and others, has acquired a large part of Queensway, which is bordered by the more prestigious Notting Hill and Kensington areas, in order to redevelop it. The purchases include the Queensway Estate, location of the ice skating rink and Queensway Market, and the Whiteley's shopping centre which was purchased from Standard Life Investments.

Both Bayswater and Queensway London Underground stations are located on Queensway. An important painting of the former by Walter Sickert can be seen here.

All content from Kiddle encyclopedia articles (including the article images and facts) can be freely used under Attribution-ShareAlike license, unless stated otherwise. Cite this article:
Queensway, London Facts for Kids. Kiddle Encyclopedia.