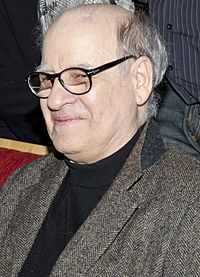 Joaquín Salvador Lavado Tejón, better known by his pen name Quino ( 17 July 1932 – 30 September 2020), was an Argentine cartoonist. His comic strip Mafalda (which ran from 1964 to 1973) is popular in many parts of the Americas and Europe. He was born in Mendoza, Argentina.

All content from Kiddle encyclopedia articles (including the article images and facts) can be freely used under Attribution-ShareAlike license, unless stated otherwise. Cite this article:
Quino Facts for Kids. Kiddle Encyclopedia.