It was used from late 1942 until 1954 and despite a few periods of intense activity it was one of Coastal Command's lesser used airfields.

The land was acquired in 1941 and a three-runway airfield with extensive dispersal areas was constructed in the first half of 1942. Despite the moorland conditions, construction was reasonably straightforward, although it did involve the removal of various field boundaries, the closure of minor roads and some drainage work.

RAF Davidstow Moor closed in December 1945 at the end of World War II and many of the buildings including the hangars were soon removed. It became a motor racing circuit, known as Davidstow Circuit and in the early 1950s three Formula One races were held there (the Cornwall MRC Formula 1 Races) including the first success for the Lotus marque. 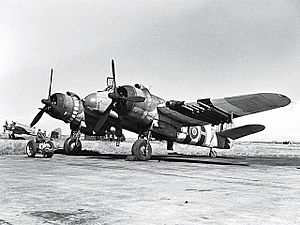 A number of RAF Regiment units were also posted here at some point:

The airfield is still partly used by microlights and motor gliders with three runways in use. The runway lengths and directions are: 02-20, 395m, 06-24, 489m, 12-30, 1,450m. PPR (prior permission required) is essential for this site. It is currently run by Davidstow Flying Club.

The Davistow Airfield and Cornwall at War Museum has been set up to commemorate the work and people of RAF Davidstow Moor.

It is located next to a creamery where Davidstow and Cathedral City cheeses are produced. Many exhibits cover life in World War II in Cornwall, including other airfields along the North Cornwall coast, the Royal Navy, Army and civilian services, and life on the home front. Other exhibits include artifacts from the Royal Observer Corps and the Light Infantry, vehicles and weapons. An impressive new hangar was completed in 2016 and now houses a growing collection of larger exhibits including a Fairey Gannet and Hawker Hunter F.6 aircraft, the cockpit section of a DH Vampire T.11 as well as a number of rare airfield and military vehicles.

The adjacent yet separate Davidstow Moor RAF Memorial Museum is located in the former sergeants' shower block and focuses on the airfield's history during World War II using archive photographs and memorabilia.

All content from Kiddle encyclopedia articles (including the article images and facts) can be freely used under Attribution-ShareAlike license, unless stated otherwise. Cite this article:
RAF Davidstow Moor Facts for Kids. Kiddle Encyclopedia.