Raine Square is a property in the central business district of Perth, Western Australia. It is in a block bound by Murray Street, William Street and Wellington Streets. The square is named after Joe and Mary Raine.

The square was formed as a pedestrian way through land surrounded by hotels acquired by the University of Western Australia in the 1960s, including the Wentworth and the Royal Hotels.

The later development of the square involved the construction of a large multi-storey building over what had been the square, maintaining some of the heritage properties that had been on the periphery of the original square.

It has since gone through a range of owners and developments since the original construction. 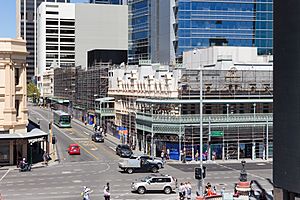 In 2017 further developments were being made to the complex of properties related to Raine Square.

The new development has proposed features that include re-introducing cinemas into the Perth CBD; the last operational cinemas had closed with Piccadilly cinemas closing in October 2013.

All content from Kiddle encyclopedia articles (including the article images and facts) can be freely used under Attribution-ShareAlike license, unless stated otherwise. Cite this article:
Raine Square Facts for Kids. Kiddle Encyclopedia.